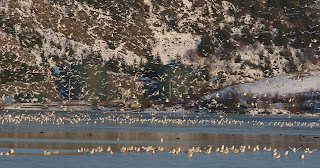 Once again I got out a little later than I wanted to today,but at least I made it out. I made my usual trip to Quidi Vidi Lake,one of the very best gull watching destinations in the world! After I turned onto the road that leads to the lake, it was light a giant beam of light shone from the sky and I think I heard angels singing, aleluya,aleluyah...finally the lake had frozen!! Why is this important? Well, eventhough QV has gulls everyday, the largest concentrations are found when the lake is frozen. Today there were about 5000 gulls on the lake- heaven on earth for larophiles like me.

Most gulls were sitting on the center of the lake, so there weren't really any photo ops but they allowed for great scope views. Of interest amoung the large flock, were about 6 LBBG's,a bunch of interesting hybrid combinations of LBBGXHERG, GLGUXHERG and a GBBGXHERG hybrid. As well ,there was a single genuine Yellow-legged Gull. St.John's is really the only reliable location to see this Eurasian species in North America. Each year birders travel to St.John's to see this species,some see it and leave happy and some don't. Hopefully the lake remains frozen through the weekend when myself and an American visitor will be looking for this and other NL specialties.

Aside from gulls, the ice had concetrated ducks in small patches of open water close to shore. This allowed for a nice study of the Athya complex as Greater and Lesser Scaup and Tufted Ducks allowed for side by study. Also of interest were a female Bufflehead and female Shoveller. 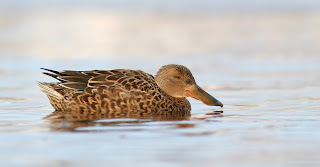 I heard through the grapevine today that a large flock of Bohemian Waxwings were seen in central NF. Hopefully this is a sign that these berry eating nomads are on their way to St.John's, as this is another target bird on my american visitors list.

Not sure what tomorrow will bring- hopefully an earlier rise than in recent days.Perhaps a good day to search for Robin flocks. Also,at some point hopefully I will learn to post images where I want them on the blog,instead of just at the top of the page.....
Posted by Dave Brown at 1:22 AM