Of Berries,Robins and Euro Turds

Newfoundland birders have been commenting for months about the excellent berry crop this year. It was early this summer when we were saying "if every flower produces a berry,then we will have huge berry crop this year". But,why is this important?Obviously berries provide food for birds throughout the winter,but more importantly to birders, they feed Robins- lots of Robins and where you find Robins in winter in Newfoundland, you might just find something more exotic from Europe or Western North America.

When scanning through Robin flocks in winter there are two birds that every Newfoundland vagrant hunter has in the back of their mind, Fieldfare and Redwing. Newfoundland has more records of these European Thrushes than most other provinces and states combined. Of the two, Redwing has been found more often in the last decade,being annual over the past several years,often with more than 1 individual per winter.Fieldfare has been much more difficult in recent times,in fact,there is only a single record that I can think of in the last 10 years. 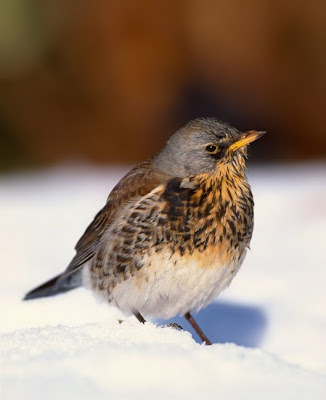 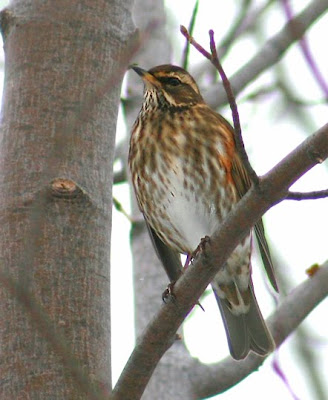 There is a second reason that we are excited about the possibility of these Thrushes being discovered this year. Eastern Newfoundland experienced a prolonged period of NE winds during October,often with winds spanning the entire breadth of the Atlantic, from NL to the UK, or Iceland. This is just about the time when these European Thrushes are migrating in big numbers. On it`s own, one of these birds would be incredibly difficult to find.Lucky for birders,they have a tendency to associate with Robin flocks,so the search for Fieldfare or Redwing in Newfoundland, often begins first by locating a flock of Robins.

As of today,no real large flocks of Robins have been seen on the island. Scattered flocks of 10-50 birds have been seen,but nothing like some of the massive flocks of hundreds or thousands that we often see gorging on Mountain Ash ( locally referred to as ``Dogberries``). Given that we have such a large berry crop this year,we assume it is only a matter of time until we see these large flocks, and if we are lucky, maybe we`ll find a European visitor among them.
Posted by Dave Brown at 4:41 PM