Well, I'm not really into making bold predictions and maybe this doesn't qualify.However, looking at the current weather maps, I can't help but get a little excited about the possibility of some birds being pushed our way over the next 48 hours.

Currently there is a nice low pressure system that stretches from The Great Lakes to the Carolinas. This has been kinda stalled there for a few days,but will start motoring east, then north east reaching the Avalon Peninsula of Newfoundland by Friday. See the maps below... 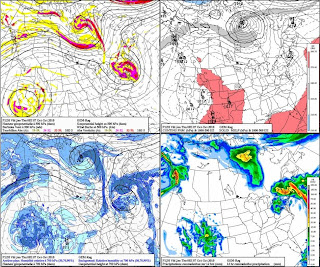 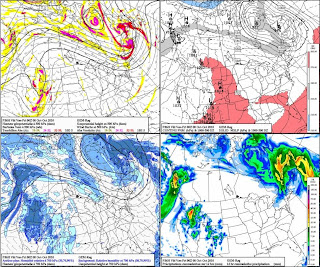 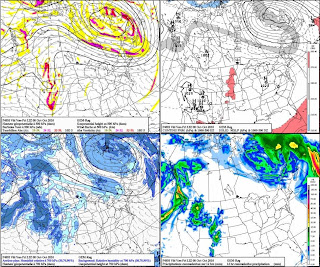 Notice the progression of the low pressure system as it moves from SE of the Great Lakes to Newfoundland. Notice the isobars showing a nice SW flow,off the eastern seaboard, up to the Avalon Peninsula, especially for Thursday night,Friday and Friday night..White-eyed Vireo anyone???

With any luck birds will lift off on the NW wrap around winds that follow the passage of the low pressure system and fly with the NW wind in a SE direction towards the coast. Some will likely get carried out over the sea and may get caught up in the SW flow, then follow these SW winds with the low pressure system until they reach land on the Avalon Peninsula. At least, in a perfect world ( from a birders perspective), this is how it would work. Either way, I'm hoping for some kind of an influx. If you were on the fence as regarding my southern Avalon trip, this weekend,maybe this will serve to entice you a little further. Again,this is all best guess,but the weather maps show the potential exists!!Guess we'll see on Saturday....
Posted by Dave Brown at 2:16 AM No comments:

Well we're about half way through the fall vagrant season in Newfoundland right now and to this point the birding has probably been about average to slightly below average. There has been a rarity here and there,but no real major events that really get the adrenaline pumping.

The reason for our relatively mundane fall thus far is the lack of any real major weather related bird influxes,or fallouts. Maybe I'm just spoiled from last fall, when there was a nice fallout event on the Cape race Road( extreme SE Avalon Peninsula) in early October that brought a couple of Hooded Warblers, Kentucky, Yellow-breasted Chat,a couple Chestnut-sideds, Prairie Warbler,as well as both Scarlet and Summer Tanagers,Cuckoos and a selection of less rare warblers,such as Ovenbirds. This was a remarkable event and was the result of a low pressure system that generated warm SW winds directly from the Carolina's and even further south directly to the southern Avalon Peninsula.

As I said there have not been any such event to this point, this year,but we're still hopeful!Three weeks ago we were hopeful too as Hurricane Igor rushed ashore,but all it did was carve a path of destruction, not leaving even a single pelagic stray as a consolation. This was disappointing. Since the storm was almost entirely pelagic,never really getting close to land,aside from Bermuda, we knew the possibilities were limited,but similar storm have dropped a White-tailed Tropicbird. We were hoping for a repeat, or maybe even something more significant,but despite lots of searching,nothing was found.

Just before Igor,however, word got out about the rarity of the season, so far in Newfoundland- a FORK-TAILED FLYCATCHER. This is a primarily South American species breeding from central Mexico to Argentina,but is an austral migrant( migrates north,instead of south for the winter) and it known for it's wandering habits. The bird that was photographed in Chapels Cove, Conception Bay on the northern Avalon was just the second or third record for the province. 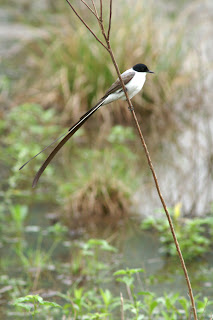 Aside from the FTFL, there has been a smattering of rarities,with a surprising three Kentucky Warblers,all found on the southern Avalon(two at Cape Race,Trepassey. Aside from that there has not really been any other vagrant southern warblers reported aside from Prairie Warbler and Yellow-breasted Chat,both of which as expected annually in fall in small numbers. 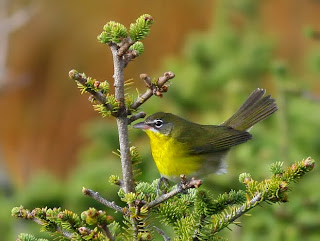 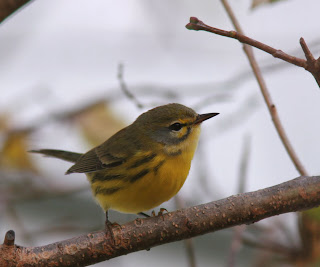 Photographed in my backyard in late Oct 2007

Things have also been relatively slow on the shorebird front as well,on the Avalon Peninsula at least. By that I mean there have not been any outstanding rarities, or any abnormally large influxes witnessed. Perhaps the best shorebird seen this fall on the Avalon is Hudsonian Godwit,of which there were 5 in St John's just a couple of weeks ago. Below are a couple of photos I managed of the birds during the 5 or so days they were in town. 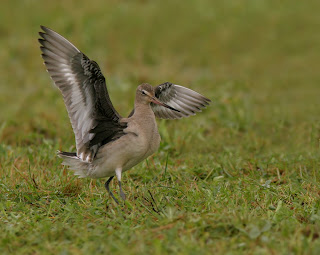 So,thus far it seems as though this is a very negative report of birding on the Avalon Peninsula this fall and perhaps hte birding has not been exceptional in terms of rarities,but we still have a lot to look forward too. October and November often bring some of the best rarities,since this is the best time to find rare western strays, i.e. the enigmatic Townsends Warbler.

Hmmm enigmatic Towsends Warbler..what does that even mean? Well, it's an odd thing about TOWA in Newfoundland. I believe that we have about 14 records for this species sin about the last 25 years. This fact alone is somewhat staggering,since this is perhaps close to the combined number of records for the rest of the Maritimes and the NE states, but what's even more bizarre, is that all but two of these have occurred on the same street (Waterfordbridge Rd) in St.John's,and mos tof those within about a 300 m area!! I will not even attempt to offer an explanation for this phenomenon, except to say that we must be missing a s**tload of TOWA's in the rest of Newfoundland!! 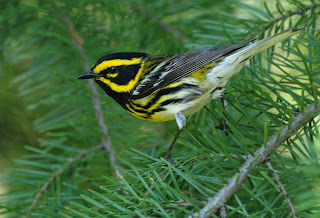 Coming soon to the Waterford Valley??!!


Almost sunrise- time to go find birds,rather than just sit here and write about them. To be continued later today...

Ok,so birding today wasn't all that productive,but I did manage to refind a Great Egret and a Common Gull that I had found a few weeks ago. The Common Gull(a 2nd winter bird) was especially cooperative and I was able to get some nice photos. 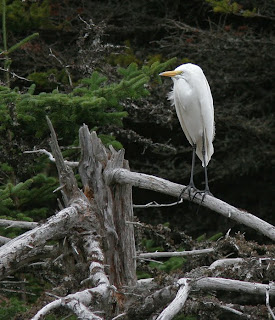 Record shot of today's Great Egret at Blackhead. It probably arrived during a blast of southerly winds this week. Interestingly another Great Egret was reported on the SW Avalon Peninsula yesterday. 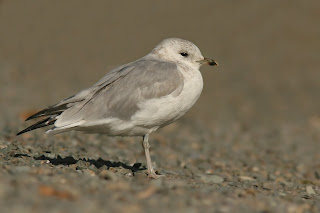 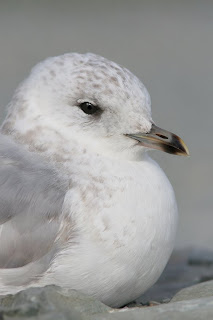 Note the somewhat thin,short bill, with zig zag black markings and steep forehead combining to give the familiar "gentle" expression, as opposed to the more fierce expression of similar ages Ring-billed Gull

Well,since it's been about 20 hours since I started writing this post, I now seem to have lost my place entirely. Since, I mentioned the Common Gull above I guess that's a good place to pick up. We tend to think of winter as being high season for gulls in St.John's,but fall offers exciting opportunities as well. Oue Black-headed Gull numbers are slowly increasing, I've already found two Yellow-legged Gulls ( returnees from last winter?)and now the Common Gull,not too shabby.

However,before we get too ecited about gulls yet,we can't forget there is still a little over a month of prime passerine vagrant hunting left yet. In fact, November often brings some of the most exciting birding in Newfoundland. Think of birds like the afore mentioned Townsend's Warbler, Yellow-throated Warbler,Eastern Towhee..then there are the more enticing options such as Cave Swallow and Ash-throated Flycatcher,both of which have occurred in the last 3 years!!

Newfoundland first ever Ash-throated Flycatcher,found by yours truly last November in Ferryland on the southern Avalon Peninsula. This nice photo was taken by Jared Clarke.

So,that's an idea of how things have gone so far this fall and a hint of what might be yet to come. This fall has been relatively unexciting, in that we have not had a major vagrant event,but there has been a fairly steady trickle of good birds and the above two birds prove that there is still time for something exciting to happen!! We

With that I'm going to end this somewhat rambling post...next time look for something more structured..maybe a gull ID article in preparation for gull season and my upcoming workshops.
Posted by Dave Brown at 5:30 AM No comments: