I received an email from a local birder who has been in contact with a birding friend in Ireland. Some interesting things happening on that side of the "pond" as of late. Apparently England and Ireland have been hit by an unusual amount of wintry weather,with lots of ice and snow cover when there is usually none. As well, there have been strong offshore winds. This combined with very strong easterly and North Easterly winds in Newfoundland, could very well bring some European flavour to our shores in the coming days.

Should European Thrushes,Lapwings or anything else arrive in Newfoundland they will find mostly open and unfrozen ground,since the vast majority of our show has melted away, with recent mild days and heavy rains.Below, you will find a note that was written in The Auk in 1928.It speaks of thousands of Northern Lapwings that arrived in Newfoundland under similar circumstances,albeit slightly earlier in the year. Now I'm not saying we are going to get a major European invasion, but it's good to be prepared and fun to dream of the possibilities.

It is a matter of great rarity and interest when single birds (not wandering seafowl) of European species appear in North America as 'stragglers' travelling on
their own wings; but now has occurred the astonishing fact that hundreds,
perhaps thousands, of Old World Lapwings (Vanellus vanellus) have
visited the northern shores of this western continent during the early
Vol1. 9XL2V8] ] GenerNaol tes. 209

Early in Januaryof this year I began to receive from correspondents
in Newfoundland letters addressed to my Natural History department of
'The Family Herald and Weekly Star' of Montreal, asking the name and
.habitat of unknown birds that had suddenly appeared in various parts of
that big island. From the rough and scanty descriptions given me I judged
that the strangers must be European Lapwings, and consultation with Mr.
W. DeWitt Miller and other ornithologists and their collections at the
American Museum of Natural History in New York, confirmed my conclusion.

These Lapwings were observed first on December 1 and during
that month appeared to be well scattered over Newfoundland, and further
reports rapidly came to my desk, enabling me to publish a fair account of
this novel invasion my page of the' Weekly Star',under date of January
25, 1928. While a few writers mentioned or implied that only a singlebird-
quickly noticed, for nothing like this Plover exists in America--
was seenb y them at the time of writing, most of my correspondents spoke
of 'flocks.' One letter said that 'hundreds' arrived at Harry's Harbor on
December 20, 1927, and flocks are reported on the same day in the Fogo
district--islands adjacent to Cape Fogo, a forward point on the northeast
coast. Severalo ther communication spoke of 'eight' to 'thirty or forty,'
and in general it was made evident that great numbers of these birds
were visible, in companies and over a large territory, from mid-December
to mid-January.

All the letter-writers asserted that easterly gales had assailed the
northern coasts about the time the foreign birds became noticeable, one
man reporting that he had picked up a specimen on the seashore in the
midst of a raging wind. "During the second week of December, 1927,"
to quote a letter from Mr. Theodore Bugden, of Deer Lake, Nfid., "there
was a successiono f strong easterly storms, with rain, followed by cold
westerly winds about the third week .... The birds remained at Deer
Lake for three days only, and disappearing uring a strong westerly wind.
None have been seen since." (A westerly wind there would blow toward
the forested, thinly settled interior of the island.) Other correspondents
note a similar sudden departure from various places--whither no one knew.
On their first coming, as all agree, the Lapwings appeared very weary,
thin and tame, but began at once to search for and find food on the ground;
and as they rested and gained strength they became wilder and noisier.
No evidence is at hand as to whether females as well as males were present,
the small differences between the sexes not being noticeable in the circumstances.
As was to be expected, I presently heard of Lapwings in various parts
of the adjacent Canadian mainland. They soon crossed St. Lawrence
Gulf to Cape Breton and scattered over Nova Scotia, even finding their
way to the remote island of Grand Marian. In New Brunswick they were
quickly reported about the city of St. John, where it is said that 'hundreds'
were soon killed by a great snowfall.

This describes what every Newfoundland birder dreams of. Who knows what else was involved,aside from Lapwings. I'll be taking a birding from Wash. DC to tour the southern Avalon Peninsula tomorrow morning. This will be in the back of my mind. 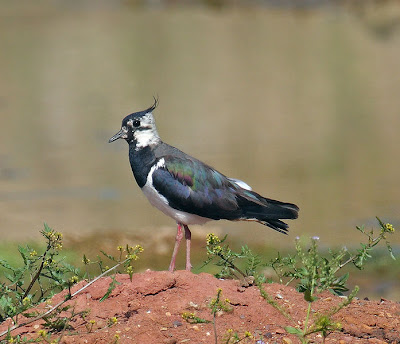