The Best of Looks at the Rarest of Gulls

Today I made my usual birding loop after dropping my fiancee off at work. I stopped at the sewage outflow and spent about an hour there studying and photographing Kumliens Gulls. Among the Icelands was a very dark winged bird that many characters that are excellent for Thayer's Gull. I'll probably add some photos of this bird tomorrow. In all likelihood this is bird is mostly THGU,but doesn't look perfect for this species and perhaps it's an intergrade.

After I had enough of the Iceland Gulls I moved to Quidi Vidi Lake. Despite the lack of ice,there were actually a few thousand gulls on the lake and in the adjacent fields. I scanned the gulls several times but found nothing of real interest,aside from a bunch of Lesser Black-backed Gulls. So I figured I'd head home,but at the last minute I decided to make one more stop at the sewer outlet.

As I was scanning the gulls I noticed there were quite a few more gulls resting on the remnants of an old wharf. On of these birds looked like a Yellow-legged Gull,so I drove closer to the area for a better look. I was actually able to drive to the exact area where the gulls were resting(behind the Harvey Oil Bldg on Water St). There was a chain link fence separating me from the gulls,but luckily there were breaks in the fence every 10 feet or so,which allowed for some nice Yellow-legged Gull photo ops.

There is something special about Yellow-legged Gulls. The combination of gleaming white head,crimson orbital ring,medium gray mantle and yellow legs, seem to form the perfect gull(for me at least. No doubt, this birds extreme rarity on a North American scale, makes this gull even more attractive. This was perhaps my 15th observation of this species in in the last 3 months,but every experience with this gull is exciting. I was actually so close to this gull today,that when viewed at 60X in my Swaro scope, I could actually count the ridges in it's orbital ring and the scales on its legs- crippling looks at what is arguably the rarest gull that occurs on the North American Continent.

Lets hope that tomorrow presents similar opportunities,as I will be guiding a birder from North Carolina,who has made the, primarily to view Yellow-legged Gull. 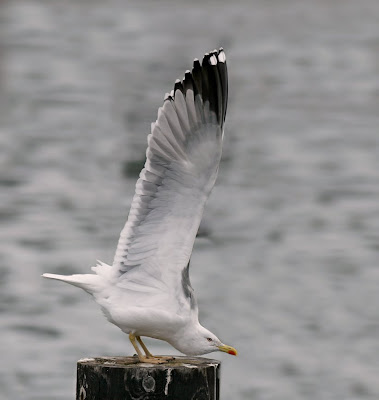 Note the very obvious contrast between the black primaries and the mantle and underwings. Even the palest Graellsii LBBG's do not show this much contrast between primaries and mantle. This wing tip pattern is typical of the species,with a single mirror on p10,extensive black on p6-p10 and a black bar on p5 (sometimes there is a black mark on the outer web of p4). Also note the lack of any pale tongues or moons eating into the black on the primaries.


The following 4 photos show the remaining field marks that separate YLGU from similar species. Note the sqarish hear,with peaked rear crown,large bill with steeply curved culmen and large red gonys spot. Crimson red orbital ring is obvious in this species even at some distance. The mantle shade is difficult to capture digitally,but in life if betweeb smithsonianus HERG and graellsii LBBG,but often tending closer to a pale graellsii. Legs are often between a dull to bright yellow and don't seem to show the richer orange tones that you sometimes see in LBBG . 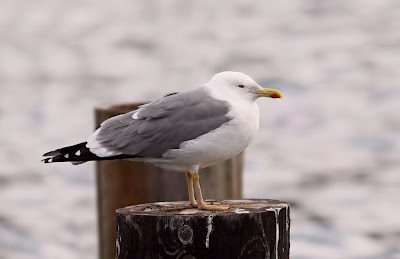 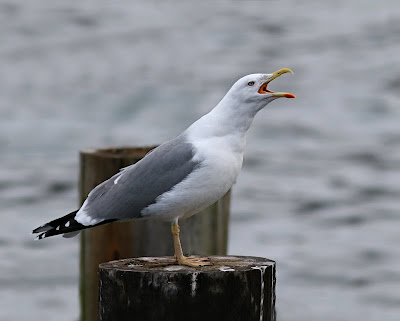 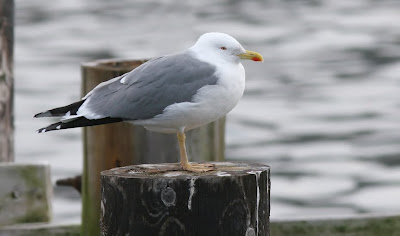 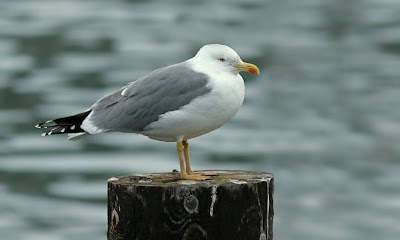 I would also like to take a second to mention a great birding website and resource called .Fatbirder. .It is a great palce to find tons of great birding sites,trip reports for many locations,all over the world and much more. I highly recommend that you take a look of you get a chance.

Fatbirder. - A great resource for birding information.
Posted by Dave Brown at 1:41 AM