Birding for Winter Specialties in Newfoundland

Over the last two days I have been birding with Keith Camburn, helping him pick up some Newfoundland specialties. He has amassed an ABA list that most of could only dream of. One bird that has eluded him (and many listers) is Yellow-legged Gull and seeing this species was our main focus.

We met yesterday at 8:00 am at Quidi Vidi in a heavy drizzle. Although the conditions were not ideal, the gulls didn't seem to mind and there were decent numbers at the lake. We scanned the flocks a few times and never saw anything but our usual species and a couple of hybrids. At 10:41 it happened. Keith noticed a gull with with a gleaming white head and medium gray mantle, that was easily darker than the surrounding Smithsonianus Herring Gulls. I got on the bird and confirmed it was indeed a Yellow-legged Gull. In fact,it was the same bird that I had photographed a day earlier at the St.John's harbour (see previous post for photos).We enjoyed nice looks at this rare gull until it eventually flushed with the other gulls, for some unknown reason. We would find this gull again 4 hours later in the same location for a second look.With the major target bird out of the way we set out to see some of the other Newfoundland birding specialties such as, Tufted Duck (30+), Eurasian Wigeon, Eurasian Green-winged Teal, Common Gull, Black-headed Gull and Great Cormorant- not to mention over a 1000 Kumliens Iceland Gulls. At that point the light was starting to fade and we decided to call it a day and decided to devote the following day to birding the southern Avalon.

We had a great day today birding on the southern Avalon, seeing many other nice northern birds, that one just doesn't get to see that often in the southern US. Some of the notable species included, Boreal Chickadee,White-winged Crossbill,Pine Grosbeak,Northern Shrike and really nice flock of 250 Snow Buntings! Aside from passerines, we also saw large numbers of Common Eiders and long-tailed Ducks, 2 King Eider, all 3 Scoter Species,Red-necked Grebe and had knee-buckling looks and amazing photo ops, with 70+ Purple Sandpipers. 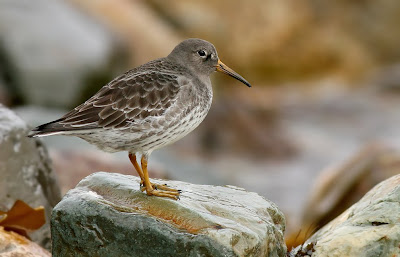 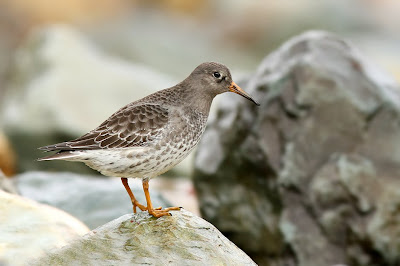 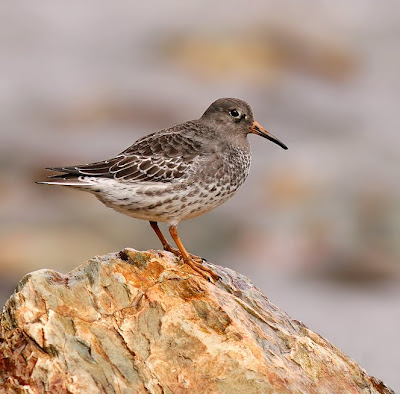 All of this, combined with the fantastic coastal scenery, made for a nice end to successful visit for Keith and I just happy that we were able to see so many of the birds on his wish list.

I still have some room available on my southern Avalon tour on January 16th,but I'm expecting it to fill quickly.If you'd like to experience birding like this for yourself, drop me an email to book your spot.
Posted by Dave Brown at 12:15 AM