The Excitement is Building

I have just returned from birding the southern Avalon Peninsula. My target for the day was Northern Lapwing- I had two, but not the same ones reported yesterday! I checked the areas where yesterday's birds were seen and found nothing. I even took my Chocolate Lab with me,who would have flushed every Jack Snipe within 2 miles if there were any present.

Jack Snipe..hmmm,why did I mention that? Well, in a previous blog I spoke of the great lapwing invasion in the winter of 1927.Along with those Lapwings was a Jack Snipe,in Labrador. Anyway, I was talking about Lapwings, I'll get back to the Snipe later. I dipped on the Portugal Cove South Lapwings but caught up with one on my second pass through Trepassy (West of PCS). I was just leaving the conveinience store when I heard a Lapwing calling overheard. I tried to get on the bird but failed. I chased the bird in the direction that I heard the call. I heard the bird call a couple more times over the next 10 minutes,but despite over an hour of searching I couldn't locate it, so I gave up.

I was feeling pretty dejected until I got a call about an hour later from a birder who had found a Northern Lapwing in Bay Bulls (20 min drive S of St.John's). I sped to the area and got good but distant looks at the bird. I also captured what might just be the worlds worst Northern Lapwing photo,taken in heavy overcast not long before dark. 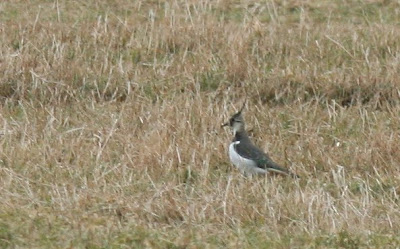 I got home and had an email from a local birder that was entitled RED ALERT NF. Things are happening in western Europe.There is a massive movement of birds,Thrushes,Lapwings,Jack Snipe and Eurasian Woodcocks. These birds are excaping the extreme winter conditions in the UK and are turning up in Ireland in huge ( unprecendented?) numbers. Included below are some excerpts from an Ireland birding newsgroup.Remember the Jack Snipe I spoke of above...

“There's an almost continual stream of winter thrushes(90% Redwings,10%Fieldfares)heading out west from Sherkin this morning, between 9.30 - 10.30at least,with birds passing overhead at about 100 p/minute.There was asimilar stream of birds throughout yesterday as well,up until 2pm at least,though numbers weren't so dramatic,maybe 40birds p/minute at most.Is thisalso happening elsewhere?”

“There are indeed massive numbers of these thrushes about at the momentin almost all areas including city suburbs. Lapwing numbers are alsoat an amazing high. Sociable plover anyone?”

“Obviously these birds will have to try and make land!Interestingly while at Red Barn Youghal yesterday afternoon I saw a constant stream of Redwings,Song Thrushes and Fieldfares coming in apparently directly off the sea.Are these British and European birds or "Irish" birds who have flown out to sea and had to rethink their strategy? Very few of the usual winter wagtails and pipits at Red Barn in spite of the feeding-I wonder where these birds went?”

“I was on Cape for New Year and there were Redwing in every field,
especially those with cattle breaking up the ground.Only 2 Fieldfare
but most notable were large numbers of Robin.Only other bird of note
was a Peregrine.”

“Large numbers present out in West Connemara here for the last two weeks.Most of the thrushes were actually flying East last week? Had 1 Waxwing in.Clifden last Sunday also.Alot of thrushes feeding in seaweed and even on the tideline amongst Ringed Plover and Sanderling one morning.Put out feeders 2 days ago for the first time and they were mobbed by the end of the day.It usually takes bird days to find/use new feeders in my experience”

"Phenomenal happenings here.Redwings and Fieldfares even in downtown Belfast.A Scottish friend who lives on the island beside Cape Clear Island reports a stream of thrushes going west...that means out to sea!Quite a lot of JACK SNIPE being reported all over the place too. And stacks of Woodcock in western Ireland."

All of this might not amount to anything more than we've already experienced. But,where else in North America can you see more than one Northern Lapwing in a day?The extreme winter weather is supposed to continue in the UK,if we get the right winds,it could be like the birds of Europe have migrated to Newfoundland. It will probably never happen,but if it did, it could be the single greatest birding event in the history of North American Birding.Fow now we wait,try to keep a level head and contain the excitement. Remember Christmas Eve when you were a kid? That's what Newfoundland birders are feeling right now!
Posted by Dave Brown at 7:47 PM