Year Birds and a Lapwing Report!!

After yesterdays debacle with the car windshield,I decided to actually try to get some birding in today.I, of course, made my usual stops at the sewage outflow and QV Lake- not much ro see there so I headed off in search of berry eating birds.

I actually saw my first Bohemian Waxwings,since last winter in Flat Rock, a small community about a 15 minute drive north of St.John's. It was just a small flock of 12,but I think these are just the vanguards for the larger numbers that should inevitably follow. 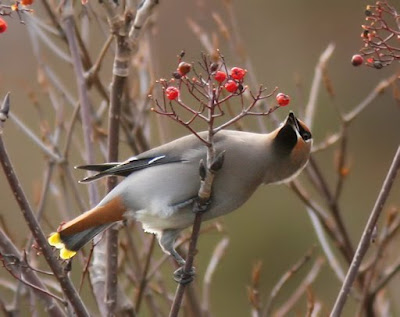 Also in Flatrock, I found a small flock of 8 Eiders,that amazingly included a brilliant female King Eider. I was able to photograph this species for the first time today. Even though the photos aren't very good,they make good record shots and serve as a nice memento of this cool experience,with a very cool bird.

There was a third year bird added to my 2010 list today, American Coot. We were commenting earlier in the year, that this would be the first winter in very long time, without an American Coot at QV Lake. Well,one materialized out of no where and was reported from QV Lake yesterday. I caught up with it today walking among Mallards and Pintails and looking very comfortable. It was very tame and totally unconcerned by my presence. I wonder if it might be one of the birds that overwintered at this location last year. 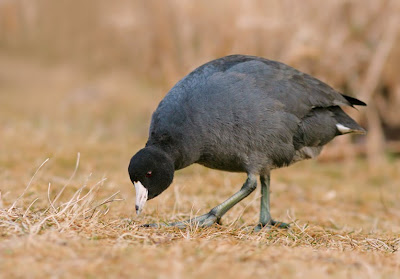 However,while I was out today finding these birds a much rarer bird was found. A Northern Lapwing was reported from Portugal Cove South, on the extreme SE tip of the Avalon Peninsula. For those who have bee following gmy blog, you will remember some time ago I wrote about the winter Lapwing invasion of 1927 and 1966. In the former event, thousands of Lapwings invaded Newfoundland in December and January, escaping unusually extreme winter weather in the UK and riding strong NE winds to Newfoundland. Well the UK has had really ugly weather over the last month and we've had out our share of intense E and NE winds. Is this Lapwing a sign of bigger things to come? Well, no one knows, but I'll be in Portugal Cove South for sunrise tomorrow morning to find out. I'll post my findings on my blog tomorrow evening.

I should also note that just a single spot remains on the Southern Avalon Encore Birding Tour on January 16th.
Posted by Dave Brown at 11:22 PM