I made my second rather lengthy chase of the year today,this time in search of a Hornemann's Redpoll, also known as Greenland Hoary Redpoll. Hoary Redpoll's are somewhat rare in Newfoundland,especially in a year that has not seen any significant gatherings of finches,including not a single report of Common Redpoll! Most years we get a few Hoary Redpolls,among Common's, but one had to feel very lucky to just pick up a random Hoary like this and a Hornemann's to boot!

Hoary Redpolls are currently divided into 2 subspecies, "Southern" Hoary Redpoll Carduelis hornemanni exilipes and Greenland or Arctic Hoary Redpoll Carduelis hornemanni hornemanni. The more southerly exilipes breeds in "low" acrtic across Canada and Eurasia,while the more northerly Hornemann's Redpolls, as their common name suggests, breed in the "high" arctic, from Greenland across some of the most northerly islands in the Canadian "high" arctic. This is a true arctic gem, that is only rarely seen in Newfoundland and very rarely is it seen as well as we saw it today, or under such good conditions!

Hoary Redpolls in general stand out among a flock of Common Redpolls by virtue of their frostier upperparts(including unstreaked rump),less streaky underparts,stubbier looking bill and increased feathering around base of their bills. Overall they often look frosted when seen among a flock of Common Redpolls. Kind of like comparing a frosted "mini wheat" to a regular one!!?? Ok maybe thats not a great analogy,but you know where I'm coming from.

Hornemann's Redpoll take the above features to the extreme. They are also significantly larger than other Redpolls. Although the bird seen today was seen along, or among Snow Buntings, it was noticeably large for a Redpoll. Below, is a list of features exhibited by this bird, that are consistent with Greenland "Hornemann's" Redpoll and following that, are a series of photos that I took of the bird this morning,from the shelter oh fellow birder,Dave Sheppard's SUV- thanks again Dave!!

- large size- no other Redpoll to compare it to,but appeared large for a Redpoll and apparently not totally dwarfed by surrounding Snow Buntings!
- head shape,bill structure and feathering at base of bill looks good for hornemanni- creating a very stubby billed appearance.
- large white stripes in back,thick white wing bars,lots of white in tertial edges and wing coverts
- largely unstreaked underparts aside from two fine rows on flanks
- completely pure white undertail coverts
- large pure white rump patch seemingly extending to lower back (streaking only on tips of uppertail coverts)

There are other differences as well and if anyone is interested in exploring the minutiae of Redpoll identification,here are a couple of decent links. 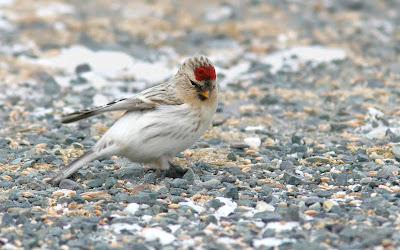 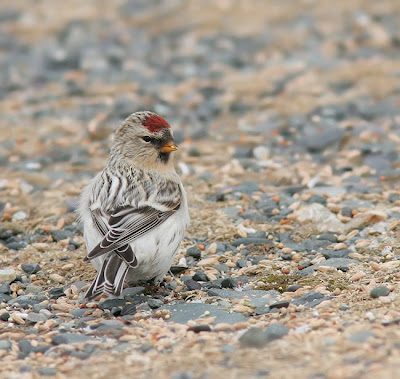 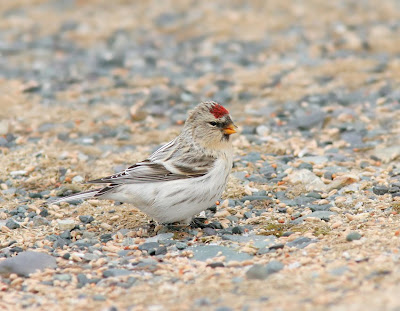 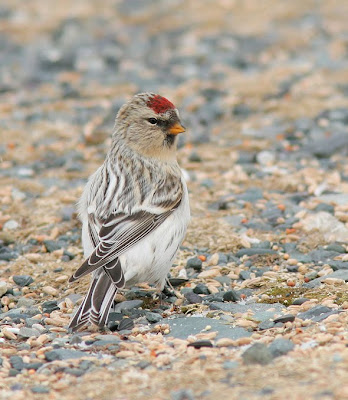 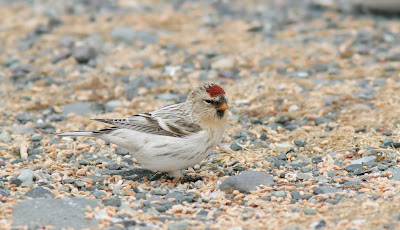 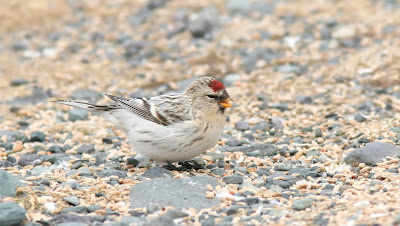 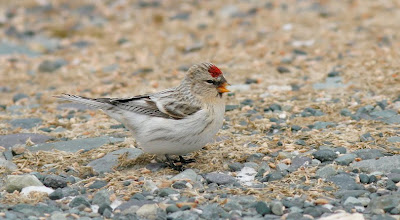 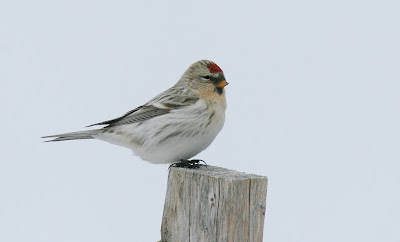 The Hoary Redpoll brought my year list to a modest 86 species. However,more important than the species number, is the fact I've managed to see some of the more "troublesome" winter species, such as NORTHERN LAPWING, REDWING,Gyrfalcon,Snowy Owl and now Hoary Redpoll. If I can add a Barrow's Goldeneye and an Ivory Gull, I'll be feeling good about the winter season.
Posted by Dave Brown at 3:53 AM