Let me preface this post by saying this is not meant to be a treatise on the identification of Yellow-legged Gulls,there has already been lots written on that topic and better presented than I'm capable of doing here. I'm writing this purely to show what our Yellow-legged Gulls look like in hopes that it might assist other birders in finding Yellow-legged Gulls outside Newfoundland. I'll present evidence to demonstrate that Newfoundland YLGU's are likely of the subspecies atlantis and will also include criteria for separation from possible hybrid look- alikes such as HERG X LBBG. Even though its nice having the monopoly on this species for North America,I suspect a few YLGU's are flying under the radar's of east coast birders in other provinces and states.

Most of what we know about Yellow-legged Gull in North America comes from the hard work done by the 'Godfather' of Newfoundland gulling, Bruce Mactavish. Bruce had been finding these mysterious Yellow-legged, dark mantled birds for years before they were ever considered a separate species and long before anyone else cared about them. When I got on the gull watching scene around 2000 a lot of the ground work was already done.

Over the course of the last decade St.John's has seen at least one or two Yellow-legged Gulls every winter. At one point last fall we were able to identify 4 different individuals residing in St.John's in October,which is probably an all time high. Currently there are two individuals in town.

I often get questioned by visiting birders and even locals about what subspecies our YLGU's belong to. Well we kind of assume ours are atlantis(probably from the Azores). I say assume because maybe we can't be 100% certain, but we do have some good supporting evidence to support such a claim. Features of Azorean atlantis( also useful for separation from similar species) displayed by typical Newfoundland YLGU's include the following:

1) mantle color (The rare shade of gray)between Herring Gull and graellsi Lesser Black-backed Gull, but tending closer to LBBG. However, this can change dramatically depending on light conditions and the background substrate, i.e. grass,water, snow. 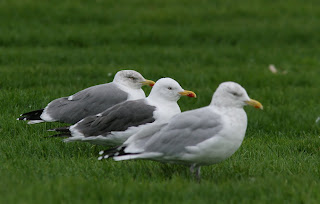 YLGU in back. Compare mantle color intermediate between HERG in front and LBBG in middle. Also note the head shapes of the three birds- photographed St.John's Oct 14,2010. 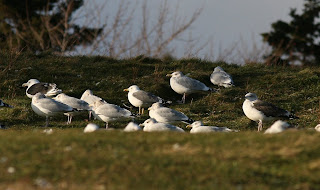 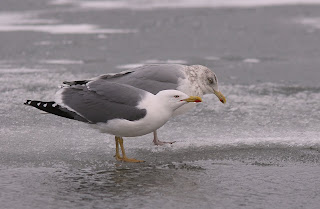 
2) extensive head streaking(late summer-late fall)- over the last few years we have been finding YLGU's in late summer (August). This has allowed us to see the dense head streaking characteristic of atlantis and Azorean birds in particular. The streaking is most dense around the eye as in LBBG and is mainly restricted to the head, rarely a few spots reaching the nape or throat- NEVER the breast as in some LBBG, HERG and LBBG X HERG hybrids. 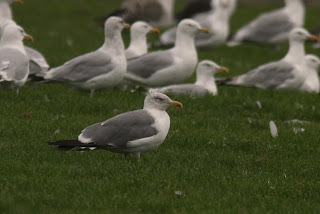 Head fully streaked appearing more dense around eye (streaking appeared darker in life). Also note active moult state with all primaries either growing or replaced, with only p10 retained. LBBG's seen on the same day still had a number of unmoulted primaries. Photographed Aug 30/2010 at St.John's. 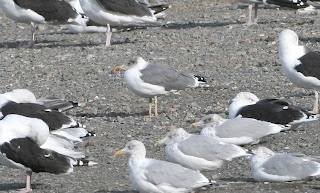 Almost appearing hooded from a distance is characteristic of Azorean YLGU's.Dark marking son bill are probably acquired as a result of basic plumage since there are no other apparent signs of lingering immaturity. dark markings in the bill seem rare in our brand of YLGU. Also notice active moult state with p9 and p10 still growing. Photographed St.John's Oct 08,2006, by Bruce Mactavish 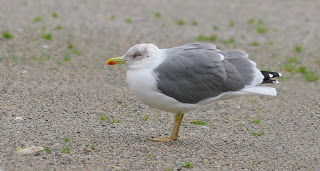 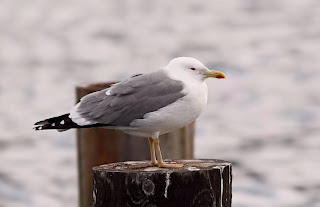 Photo displaying remnants of winter head streaking. When YLGU's lose head streaking they tend to retain it in the lores and forehead the longest. Seen here on Dec 28/2010. Most Newfoundland YLGU's are white headed by early January or late December. Birds such as this can appear to be pure white headed from a distance.

Note extensive black in wing tips and sharp demarcation of black primaries against grey portions of the flight feathers. Mirror on p10 only,black in p9 and p10 reaching primary coverts and full band on p10 typical of atlantis YLGU's. Also a mark on p4 restricted to just outer web.Based on my research this seems more typical of Azorean YLGU's, but many Azores birds do not not have it. When it is there it seems to be restricted to the inner web. Photographed at St.John's Nov 11,2010. 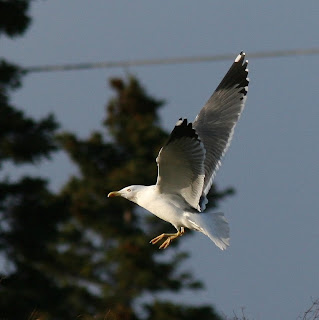 Similar wingtip as above. Photographed at St.John's Dec 02.2009 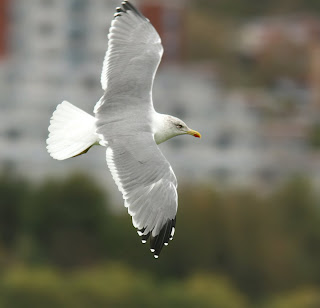 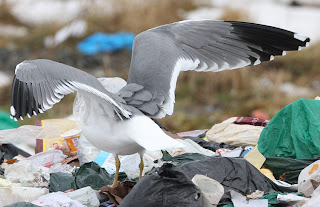 Another typical primary pattern for Newfoundland YLGU's. The thickness of the band on p5 can vary,but its always there and when thin is always thicker on the outer web. Photographed Jan 14/2008 Bruce Mactavish


4) structure- Newfoundland YLGU's tend to present as a fairly compact bird, relatively short and seeming powerful, thick legs, with a full breast and wide shoulders. The head tends to show a sloping forehead with a flat crown and angular nape. In certain postures YLGU's can show a somewhat unique flat topped head with a sharply squared crown. Our YLGU's often look slightly smaller that Smithsonianus Herring Gull. They are equally chesty, but their seemingly shorter legs may create this impression. 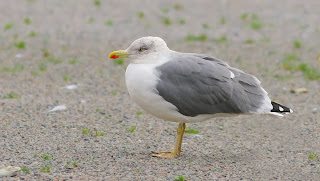 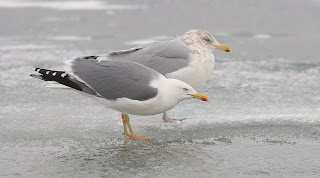 Here showing the extreme flat head and angular crown that which is is typical of the species, but especially atlantis. Note this bird apepared a little darker in life, but in certain lighting YLGU's mantle shade can be close only a couple shades darker than Smithsonianus Herring Gull. Note also the intensity of the deep red orbital ring. Photographed Feb1é2010,St,John`s. 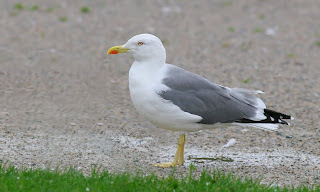 Some atlantic YLGU's can appear more round headed especially when alert. This bird is quite white headsed for the date. Photographed Oct 11/2009 St.John`s. 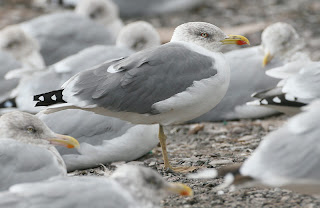 Bart Parts- As it`s name suggest YLGU`s have yellow legs as adults. Apparrently a small minority can have flesh colored legs, but all of the YLGU`s we`ve identified in Newfoundland have had dull to bright yellow legs. Along with leg color orbital ring color is another importan tfeature in YLGU. In alternate plumage all YLGU have brightédeep red orbital rings. IN basic plumage the orbital ring tends to take on varying amounts of orange coloration. Bill color and shape are also good markers in YLGU. The species is known for having a thick bill with a sharpely curved culmen,creating a blunt tipped bill. There is repots in the literature of YLGU`s gony spot bleeding into teh upper mandible. While I`ve seen this feature in some of our YLGU`s, this is not the case for all of them. Below are a few head shots featuring orbital ring and bill coloration and shape. Leg color acan be seen well in the previous images. 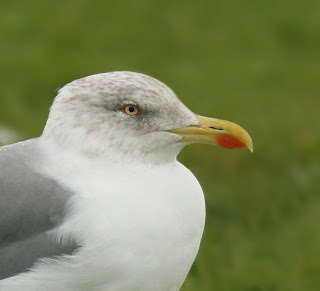 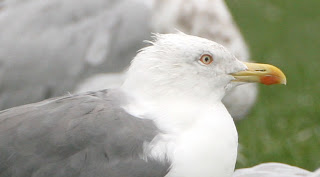 Two individuals showing characteristic basic plumage bare parts coloration. Note orbital ring and gony orange/red- red. By late December into January both the orbital ring, gony spot and gape of these birds starts to turn a much deeper red. See the next photo for an example. 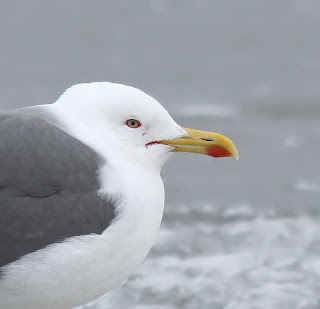 Note the much deeper red orbital ring and gony spot of this alternate plumaged YLGU. Photographed Feb 01/2010 at St.John's.

Circumstantial evidence that supports my claim that Newfoundland Yellow-legged Gulls originate in the Azores is provided by a couple of immature birds that have been identififed as being of Azorean stock. These include a 3rd winter bird from 2008 that seems ot have been widely accepted as an Azorean atlantis. As well, there is a 2nd winter bird from 2007 that seems (to me at least)a shoe in for an Azorean atlantis.

So, for the gull watching trying to find a YLGU, look for a Herring Sized gull with a mantle color between Herring Gull and graellsi LBBG,with a white or mostly white head (after mid December). It must have bright yellow legs, red orbital ring and gony spot (noticeable at some distance). The wings have a great deal of black on the primaries which is sharply demarcated from teh grey portions of the wing. It will most likley have a single mirror on p10 only and must have a complete black band on
p5. after you see al this, take as many photos as you can, call you friends then go home and celebrate a terrific bird!

NOTE: The hybrid discussion and photos are yet to come.
Posted by Dave Brown at 8:29 PM