Birding for Ptarmigan in Newfoundland (and Long-eared Owl!)

It is starting to become apparent that something is happening with Owls on the Avalon Peninsula of Newfoundland. Many years we have between 0-1 species of Owls on our winter list. This year we have 6!! Over the last three days there have been 2 Boreal and 2 Saw-whet Owls in St.John's. There have been a couple more "small Owls" and a couple of Short-eared Owls on the southern Avalon at Cape Race, I wonder what's happening?

Its possible we're in the midst of a bit of an Owl influx? This happens occasionally, if there has been a particularly good breeding season the summer before and if we happen to have a harsh winter. Well, this winter has been anything but harsh, but, we had large accumulations of snow over the last two weeks and temperatures have dropped significantly. Could this have pushed these Owls to the Avalon from points farther north or west?It's all speculation for now, but I wouldn't be surprised if the reports of Owls (especially Boreal and saw-whet)continue to come in.

Anyway, enough speculation, lets get to the title of the post. We had a LONG-EARED OWL yesterday!! Unfortunately there aren't any photos, but three of us saw the bird well at fairly close range. The following is the incident described in Bruce Mactavish's words as posted on our local RBA,

John Wells, Dave Brown and I were coming back from a nice winter's day
of birding down the Southern Shore. It was getting pretty dark as we
came through Ferryland. Street lights weren't quite on when an owl
flew out from some spruce trees. It hung in the wind briefly then
landed on a telephone wire. We were excited and assumed it was a
Short-eared Owl based on size etc. It was light enough to see the dark
wrist patches on the under side of the wing. We stopped the car and
looked at it for a minute or minute and half sitting ont he wire. The
rounded head soon began to grow bumps. 'Oh look you can see the ears',
something you don't see often on a Short-eared Owl. The nubs continued
to grow until they were pencils sticking out of the head. There wasn't
an overall scream of euphoria because were still thinking this was a
Short-eared Owl. But the long ears were very disturbing. I know
sometimes you can see little ear tufts on a Short-eared Owl, something
like you can also see little tufts on the head of Snowy Owls. The fact
that when the bird first landed the head was rounded reinforced the
original Short-eared identification.It was too dark to see much detail
of the head and breast.

The bird flew along the shore behind the houses. We followed and found
it again. It was riding the wind in a gliding mode. It hung semi-
motionless over a tree top for a while but didn’t land. Then it
vanished flying away from us. We drove around looking in vain in the
darkness for it. We were all kind of quiet on the rest of the drive
home. Those long ears were very disturbing. Some quick research in
some books made the case of the long ear tufts being beyond what a
Short-eared owl could ever show. And the fact that a Long-eared could
have a tuftless head for a period of time was important. It isn’t
much to go on for a bird so rare in Newfoundland, but the length of
the long narrow ear tufts on an owl that size is trademark for Long-
eared Owl. There is barely a handful of records for Long-eared Owl in
Newfoundland.

There are rumours that the local dump has closed and rats have moved
into Ferryland. We heard this from locals when we birded there in the
morning. We didn't see any rat tracks on the fresh snow. How can
this bird be refound? Good question. Being extremely noctournal it
seems like a needle in a haystack it will be refound. That is not
saying we aren't going to try.


That's pretty much how it happened. A few birders are headed back down this morning in an effort to refind the bird roosting. As Bruce said there seems to be limited roost sites available for a LEOW in the area, so maybe there issome hope of refinding it.

Aside from the Long-eared it was a really nice day of winter birding. We had hoped to catch up with the two Redwings that were reported from Portugal Cove South, no luck there, but we did have some great experiences with other Newfoundland winter birds and even a few mammals.

Aside from that mind blowing LEOW we enjoyed a beautifully calm, crisp, sunny winter day,with some great winter scenery and nice winter species. We enjoyed prolonged looks at several groups of Willow Ptarmigan. I'm always amazed how these birds seem to thrive in such a harsh environment. They were sure looking nice in their winter plumage against the newly fallen snow. 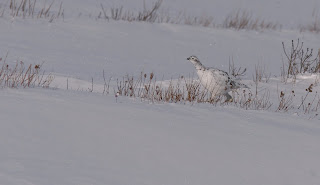 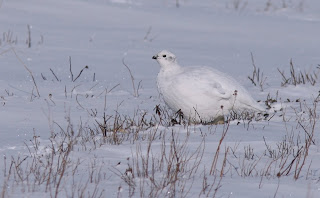 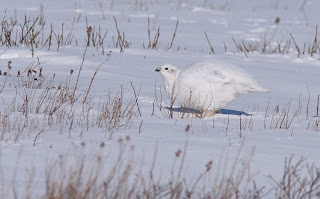 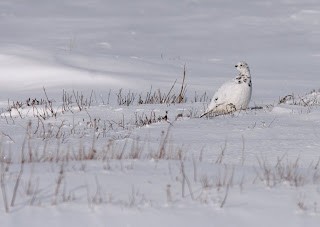 Not far from the Ptarmigan we encounted a true Avalon nomad, the Woodland Caribou.The herd of 55 that we saw today are part of the southernmost population of these animals in the world. Here is a portion of that herd.

Although we missed a couple of winter birds that we were hoping for, like Hoary Redpoll, I finally connected with another Newfoundland winter denizen, the Northern Shrike.My photo was so bad that I'm not going to post it. Instead, here is another not so good photo from a few years ago, of a juv close to the location where we had yesterdays bird. 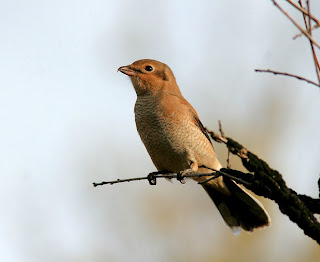 So there you have it. Great weather, great scenery, great birds. That's pretty much winter on the Avalon Peninsula in a nutshell. Well maybe we got lucky with the weather, but the scenery and the birds never disappoint.

If you love Iceland Gulls half as much as I do, you won't want to miss the next posting!! Until then...
Posted by Dave Brown at 8:13 AM