About two weeks ago now the St.John's biridng community was alerted to the presence of a Common Moorhen in the Community of Chapels Cove, west of St.John's on the Avalon Peninsula. Common Moorhen has been surprisingly rare in the last decade with possibly just two reports that I can think of, so this was cause for some excitement.

This Moorhen would be even more exciting if it turned out to be the Eurasian subspecies G. c. chloropus, rather than the North American, G. c. cachinnans. The European chloropus has been recored just once in North America, it was an immature bird collected on Shemya, a tiny island off the coast of Alaska. Given Newfoundland's history of producing Eurasian rarities, one can never be too careful with a bird like this,so we wanted ot make sure we could rule out the Eurasian subspecies of Common Moorhen.

Currently there are 12 Moorhen subspecies world wide. However, there is good reason to think that most or all of these forms will be granted full species status in the not too distant future,therby making a "European Moorhen" infinitely more appealing to a North American birder. The catylast for these splits will likley be a study,which showed that populations of Moorhens differed markedly in their vocalizations. In fact, it has already been proposed to some records committees, that the splits get underway. You can get more infomation regarding this proposal here, http://www.museum.lsu.edu/~remsen/SACCprop416.html

So, the vocalizations are different, great, but our bird was not calling. It's barely clinging to life in sub zero temperatures, in small open patches of ground keep open by a small stream, it's not in the mood to talk! 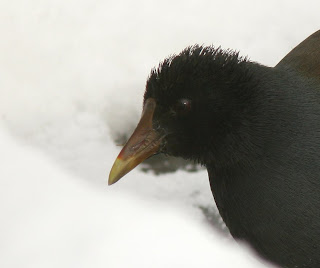 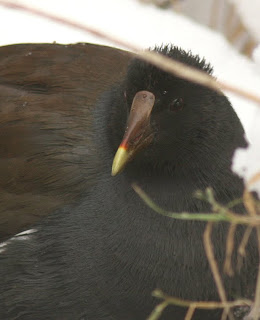 This is pretty small and somewhat rounded culmen shield, but perhaps larger than an average European Moorhen (assuming this is an immature bird) 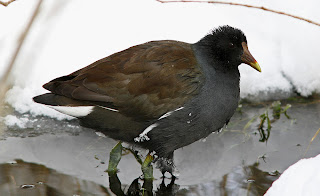 
Apparently Moorhens can be aged by the color the dorsal wing coverts and the shape of the tertials, with the immatures haveing more pointed tertials than adults. having very little experience with Moorhens, this means little to me.


I've already been advised by one expert that these subspecies are virtually indistinguishable as immatures, so I don't have any real hope of getting a definite answer here. However, when you bird in Newfoundland you always have to be aware of the possibility of European birds, especially in a year when there was a big cold weather movement in the UK and Western Europe, which has brough us numerous Northern Lapwings, 3 Redwings, a Chaffinch and an above usual number of Common Teal and Common Gulls.

Speaking of gulls, expect something in that vein for tomorrow!
Posted by Dave Brown at 9:08 AM