Today I was guiding Manitoba birder Liis Veelma. Out primary focus was the Trepassey Redwing. It took some time before the bird made itself visible,but after about an hour we enjoyed great views of this Eurasian stray and North American mega rarity. This represents the third day in a row that I have seen this bird, pretty awesome!. After bagging the Redwing,this freed up some time for general birding. Our second most wanted bird was King Eider. We drove out to the Drook at Cape Race and found only 12 Eiders,where there had been 300+ yesterday. Amazingly,within a minute I had an adult male King Eider in the scope. I got Liis on the bird and boom,lifer number two. At this point we decided to make our way back north and check harbours for Black Guillemot and Dovekie. Well,not surprisingly, we never had any Dovekies,but we did score great looks at Black Guillemot at several locations. In the coming days we will be on the look out for Eurasian Ducks, Yellow-legged and Slaty-backed Gulls,more Eurasian strays and the now elusive Dovekie. I'll post an update ina couple of days. 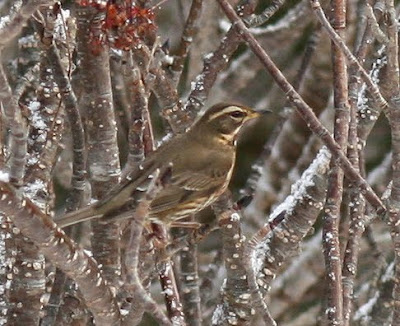 Poor quality photo of the Trepassey Redwing. This bird has been very difficult to view and is often visible for only a couple of seconds before dissappearing.
Posted by Dave Brown at 7:00 PM