After nine consecutive days of guiding, or teaching ID workshops, I finally had a day off. Now, I'm not complaining, birding everyday is a dream,but the constant early rises and the pressure of finding birds for visitors can wear on you after a while. I was looking forward to relaxing today and maybe heading out later in the day to photograph some Herring Gulls in flight, in preparation for this weekends Gull ID workshop II.

It was 11:00 when I rolled out of bed, that's about six hours later than my average rise in the last two weeks,sleep is definitely NOT over-rated. After a few hours of mindless activity, at 2:30 I finally decided to head out to Quidi Vidi Lake. My plan was to photograph Herring Gulls,instead I spent some time photographing the Tufted Ducks. When Quidi Vidi Lake freezes, all of the ducks gather around small areas of open water where rivers empty into the lake. Today there were about 20 Tufted Ducks along aith a few Lesser and number of Greater Scaup. 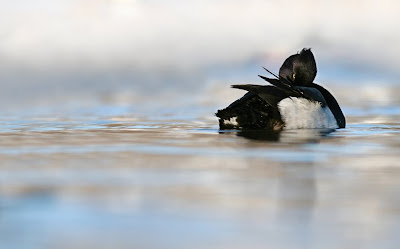 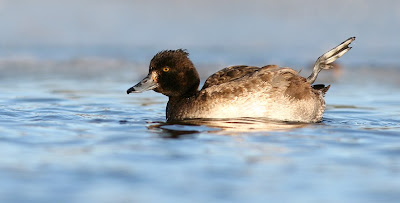 Aside from the ducks, there was a Double-crested Cormorant sitting on the ice at the west end of the lake. This bird has been wintering at the lake and is not looking very good these days.It is probably having a hard time finding food in the small patches of open water and today it looks as though it has suffered an injury on the tip of it's bill. It actually looks as though the nail is almost entirely split from the rest of the bill. I'm unsure how this will affect the Cormorant's feeding,but certainly it won't help an already stressed bird. 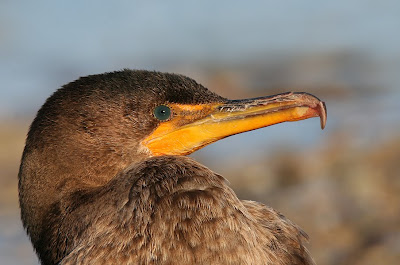 I cleaned up the bill a bit in this photo. 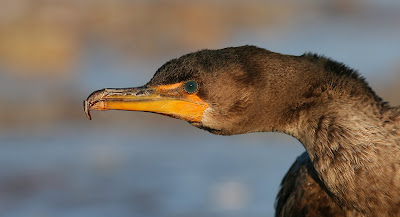 Note the crack and blood on the tip of the bill.

It always saddens me to see birds in this condition. We see it each year,when birds decide to take the risk by over wintering and are suddenly faced with very difficult conditions when things freeze up. I'm going to try feeding this bird some sardines tomorrow. If the bird takes readily to the handouts, I'm sure it would appreciate some Capelin etc, that someone might have sitting in their freezer.

On a different note today,I heard of a flock of 200 Robins that were located north of St.John's in Pouch Cove. This is exciting news, since there haven't been any Robin flocks seen in, or near the city this winter.If this flock grows, or Robins flocks are seen in St.John's I'd expect there to be more reports of European Thrushes.Stay tuned!!
Posted by Dave Brown at 9:08 PM