Over the last few years I've been spending an inordinate amount of time studying weather maps and radars and then comparing those maps and radars to significant birding events in Newfoundland in an effort to better predict the types of weather patterns that lead to some of our fall outs of southern passerines. Predicting migration is no easy task in Newfoundland. Most places just wait for a cold front to pass through and they know that there will be bird movement on the back end of the low on NW winds. Actually I'm leaving a lot of stuff out there. Its not actually that easy at all but I'm not going to get into a detailed analysis of the conditions that favor bird migration just yet. I'll save that for later.

For now, I basically want to share some speculation with you all. After all, that's what birders do best- speculate. Speculate about their next year bird, the next life bird, county bird, province bird, ABA bird. You get the idea right? I'm speculating about bird migration, more appropriately reverse migration.

Now there is a term that is familiar to many birders but still completely foreign to others. Therefore, let me explain how I understand reverse migration. Lets start first by breaking down the term into its individual bits. First, lets take reverse. That should be easy enough. A common every day term. If you drive a vehicle you know it well as going backwards. This is true, for our purposes reverse will mean backwards or the opposite of what is commonly believed. Now migration. For our purposes we're only applying this to birds so lets say that migration is simply a movement of birds towards an INTENDED destination. What's important to note here is the terms movement and intended. Birds are moving and they are headed towards an intended destination.

So, now lets combine these two terms reverse and migration, as we have defined them. When we do that we can define reverse migration as "the movement of birds in a direction which is OPPOSITE to their intended or commonly believed destination." If you haven't guessed I'm feeling especially philosophical this evening. So more simply, if passerines are generally thought to undertake a North-South migration each fall,a group of passerines that have made a sudden movement south to north would be said to have undertaken a reverse migration.

Some people get all touchy over use of then term reverse migration, but most of these people are failing to apply the term comprehensively enough. Reverse migration takes in all reasons that birds might have to migrate away from their generally intended destination. Two of several reasons for reverse migration in birds, are weather and 180 degree misoriention. For example, a large flock of birds gets caught in a strong low pressure system and is swept north on SW winds. For an excellent example of this ,read this article about one of the most dramatic weather related reverse migrations ever!

However,not all occurrences of off track birds, or reverse migrants can be explained by weather patterns. It is thought that some reverse migration in birds is due to a genetic defect that causes birds to migrate in the wrong direction by 180 degrees. Therefore, they go north when they should go south, west when they should go east etc. To my knowledge this is still somewhat theoretical but could explained some odd movement of birds. For example why are their Yellow-throated Warblers in St.John's every winter??

Anyway, lost in all of this rambling there was a point. I wanted to take a look at the weather maps over the past couple of days, compare them to the radar images of the same area and then actually get out in field to do some birding to see if any of this time spent analyzing this stuff actually pays off!

So lets start by looking at yesterday's weather map and the associated radar images for the eastern seaboard (for those who didn't know, we can see flocks of migrating birds on radar!!)

In watching the radar images note the large circular blobs that are growing and moving. Those are birds! Note that there are a large number of birds launching themselves out over the sea off of New York. Isn't it conceivable that some of those birds could get caught up in the south westerly flow and ride those isobars straight to Newfoundland?

Weather Map for Oct 6- Again the isobars are stacked around the eastern seaboard. This time they have moved a little father north and run basically from New York-Maine and wrap around straight to Newfoundland.

Once again we can see heavy migration all along the eastern seaboard. We also know that there is a pretty strong south westerly flow lying just off shore that is directing winds straight from New York to Newfoundland's Avalon Peninsula. Now look at those blobs on the radar. Notice how they bulge out over the coast in several places. These are birds moving out over the ocean in an effort to move south along the eastern seaboard. Once again its' possible that some could get out there and get caught up in the strong south westerly flow and engage in a reverse migration by following those south westerly winds all the way to Newfoundland

Tomorrow I'll be up well before dawn enroute to check out the migrant hot spots on the southern Avalon. There are four locations high on my list of places to check, Powles Head,Cape Pine,St.Shotts and Cape Race. See the maps below to get an idea of where these places are located. 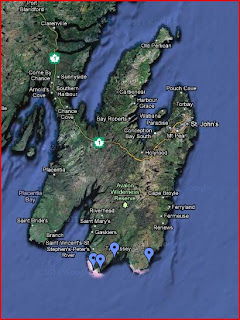 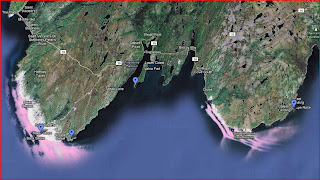 A more local view of the migrant traps. The long 16 km road that leads to Cape Race can be particularly good for holding vagrant passerines

So there you have it. This is an example of how I might prepare for a day birding. Look at the weather maps, look at the radar,choose my route, then get out there and find some birds. Like I have said before,this is not a perfect science. It is easy to see that some birds definitely got swept out over the ocean over the last two nights but will they head towards Newfoundland. If they do, will they fall out at one of my intended birding sites. Even if all of the above works out I still have to locate and identify them in vast areas! When you consider all of this is seems like a miracle that we ever find any rarities at all!

More likely it means that the number of rarities present is actually far greater than we presume, we are just lucky enough to find a very small percentage of them!


I'll try to update tomorrow or the day after to let you all know how things worked out.
Posted by Dave Brown at 7:46 PM