I have been waiting for weeks for something to break the late winter birding doldrums- today it finally happened. It was completely random how things played out. Many times my birding outing are planned with military presision.I try to get to best location given the season,winds, current weather patterns etc. All of this planning gives the "prepared" birder an edge over the general enthusiast,who just basically walks the same route every day, or just hits random locations without any thought to the possabilities and or any of the conditions I mentioned above. Well,it seems like it's been a long winter in St. John's,even though it hasn't really been much of a winter at all. However, it's been a while since anything really exciting happened.

The above sentance shows just how jaded a birder can get here in St. John's. I say it's been a while since anything exciting happened. Well it's been only a few weeks since our Ivory Gull bonanza and a couple weeks more since a White-winged Dove turned up( we no longer get very excited over these now annual visitors. A short time before that there was the Slaty-backed Gull, as well as Redwing, a few Lapwings and a Horenmann's Hoary Redpoll!! Anway, none of that means anything to the the seemingly rarity starved birders of "Attu East" as Newfoundland has been referred to in the past.

This is all a long drawn out way of saying that today I was extremely excited to have "luck boxed"( obscure poker term :)) my way into finding a Pink-footed Goose!! There was no planning,no thought and this species certainly wasn't on my radar.So much so in fact that I called resident birder Bruce Mactavish to provide a description,so he could confirm. 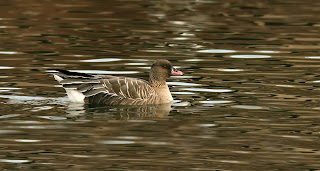 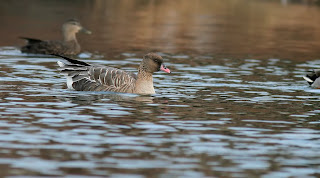 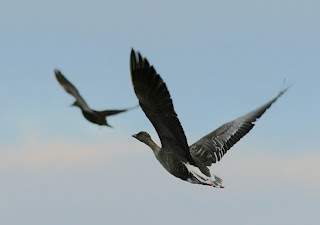 What I didn't know is that Bruce had received an email the day previous describing a small Goose near an overpass on the Goulds bypass Rdm in Mt.Pearl! He had even been to the site just 30 minutes before me to check the report but the Goose wasn't there.Well,no matter I was still happy with my "independant" discovery.

After speaking with Bruce I called a couple of other local birders to spread the word,but by this time it was getting dark quick and all the birds ( 20+ Black Ducks and Mallards) had flushed after som kids started throwing rocks into the pond.I stayed around until dark just to advise that I hadn't seen the bird.

I left and headed back to my folks place,where I had left my dog,when I headed out for a quick,random 10 minute check of the area. I was happy to find a nice spread of BBQ waiting for me upon my return- European mega-rarities, BBQ,life is good!
Posted by Dave Brown at 1:50 AM