First of all, I should say I'm sorry for not updating this blog in so long. I've been busy and preoccupied with non-birding related things,but hope to get back to regular updates of at least every couple days.

Anyway, it's not like you missed much. The fisrt official couple weeks of spring is not particularly exciting in NF, in terms of birding. We have a few of our breeders back suck as Fox Sparrows, Robins,Horned Larks,but it is not until the second week of May that the real flood of migrants begins. Almost all of our breeding birds wil return in about a 10 days period,when they will feverishly look for territories and mates, build nests, defend territories, feed young, then take off south again before doing it all over again next year- sounds like a lot of work!

Right so that's the common stuff, the expected species,but what we really look forward to this time of year are European visitors,particularly those travelling to Iceland. Most years in late April there are low pressure systems that sit off southern Iceland that generate, E and NE winds between Iceland and Newfoundland. European birds that are migrating from Britain or southern Europe to Iceland soemtimes get caught up in these winds and ride the transatlantic highway right to Newfoundland. This year there is an extra wrinkle thrown in,since there is a massive cloud of ash between Oceland and Newfoundland- who knows how this might affect Icelandic bird migration. Will birds ajust fly through the cloud? Will fly above it, below it, around it? Who knows what will happen,but there are all kinds of tantilizing thoughts flying arounf the minds of Newfoundland birders, about birds getting detoured to our shores.

It is getting to be the time of year when we start to see EUGP showing up and the weather appears to cooperating as well. As I mentioned above, we want to see low presure systems south of Iceland that generate winds from Iceland to Newfoundland- well that's what is happening right now! Coincidetally European Golden Plovers are appearing in Iceland in good numbers right now,making it the perfect time for some to veer off course. Notice the weather map below shows a nice low off of Iceland with a nice flow of air from the NE Atlantic to Newfoundland, if things work out as planned, we will see our first European Golden Plovers this weekend!! 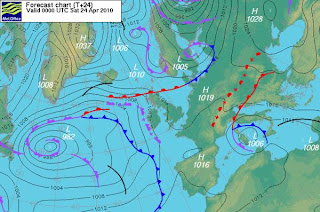 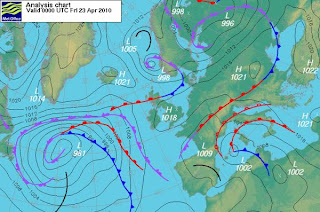 Only time will tell if these predictions hold true,but history has shown this combination of weather and date means a decent chance for Icelandic strays, there could be some exciting birding over the next few days- stay tuned!!
Posted by Dave Brown at 10:02 PM