The Coolest Bird on Earth

If a post like this looks like I'm stalling for time, it's because I am! I'm still sorting photos and have a busy week of guiding and a gull workshop ahead of me. I spent all day preparing for the workshop tomorrow night and getting ready for a a day of guiding with American guest Larry Haugh. after that I will be co leading a tour with Jared Clarke for Z Birding Tours We'll be looking to clean up on lingering European and Asian vagrants and Newfoundland winter specialties. Hopefully we turn up a new bird or two along the way.

Anyway, enough rambling. The bird I'm referring to in the title is the Gyrfalcon. I refer to myself as being ina state of severe Gyr deprivation. It's a condition brought on by extended periods of Gyrlessness (yes that's a word, I just coined it!. I keep hearing stories from some of my eh hem "older" Newfoundland birding friends about the days when it wasn't a question of whether or not you were going to see a Gyr, but rather how many and what color morph they would be! I can only imagine. Gyrfalcons have been tough to come by on the Avalon Peninsula over the last ten years. In fact I've only seen 4. I remember each and every one of them. The last one being two years ago. It was a short encounter of a dark morph bird chasing a Herring Gull in mid October at Bear Cove on the southern Avalon. 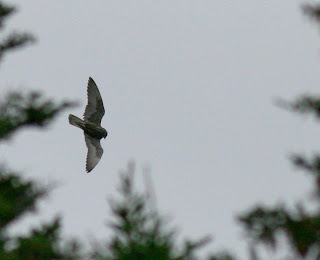 This poor photo doesn't do the bird justice!
Posted by Dave Brown at 12:09 AM