I was having a lazy evening on February 3rd, when I signed into my email to find an email from Bruce Mactavish, entitled, "here We go Again". As soon as I saw this my pulse doubled knowing i was about to learn of some great rarity. We I wasn't disappointed when I opened to message to find a photo of a Common Chaffinch. 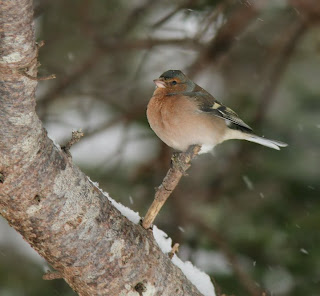 Common Chaffinches are probably one of, if not the commonest bird in Europe with an estimated 85-240 million pairs and maybe as many as 30 million (at certain times of the year)in the UK alone. So there are lots of individuals out there that could possibly make it across the ocean to the coast of Newfoundland. Well,things aren't quite that simple. Chaffinches are kept in captivity in North America. Many are imported by bird fanciers etc, for sale, I believe, mainly in the US. Because of this fact the vast majority of Chaffinch records in North America, have not been accepted, or have severely tainted by the possibility of the bird being an escapee.

So, how can one be sure that this particular Chaffinch is not an escapee? Well, the answer is you can't. However, there are a number of factors to consider when judging the probably provenance of a bird such as this. Records of Chaffinch from the interior US and California have been scoffed at by local records committees. I believe that there might have been a couple of records accepted from New England. However, there is still great deal of doubt surrounding these.

having said all of that, why am I so excited about this bird. Well that answer is easy, this is Newfoundland, anything can happen. IN fact the first accepted record of Common Chaffinch was at a local birders feeder in the early 90's. The foreign bird trade is not a popular activity in Newfoundland. there isn't anyone importing Chaffinches into the province that we know of and there are any aviaries housing exotic birds that this particular bird could have escaped from.

One should also consider proximity and Newfoundland history of attracting European vagrants. We are by far the most easterly land mass in North America, therefore it stands to reason that a Chaffinch that has flown the 2000 miles or 3200 km's from the UL would be pretty happy to see the shores of Newfoundland,just as are the Northern Lapwings, European Golden Plovers, Northern Wheatears, Redwings and the list goes on.

Also, if Newfoundland doesn't have any captive Chafficnhes, that means if this is captive bird it would have had to migrate from some location outside Newfoundland, enduring an overseas flight. What would possess an escaped Chaffinch to do this? Would it be trying to get back home to the UK or Europe, I doubt it!

Anyway, getting back to the story, we arrived in the small town of Freshwater, Placentia bay on the western edge of the Avalon peninsula around day light. We met with the home owners and waited for the bird to show- it didn't. After a while we wandered to a different feeder down the road that had more birds, we waited, saw scores of Crossbills and other finches but no Chaffinch. Brice decided to head back to the original feeder, while myself and fellow birder Jon Wells continued the stake out at what seemed like the more busy feeder. After about another 15 minutes we headed back up the road to see a birder waving their arms, telling us it's there! I took off in a sprint up the road, only to hear that the bird had circled the yards landing in the top of a few spruce trees and departed, oh no!! I took a look at a photo on the back of Bruce's camera and felt sick- we had to see this bird.

About 20 minutes later we heard a lispy chink- that's it,but where is it. No one got on the bird and it wasn't heard again. Then about 1.5 hours later, I heard the call again. I scanned the trees methodically and there it was only 20 feet from in perched in the center of a thick spruce. What a stunner. I fired off a few photos and the bird was gone. Over the course of the next hour the bird made two more very brief appearances. it never visited the feeders with the other feeder birds, it as considerably more weary. This is perhaps another point in favor of a genuine wild vagrant Chaffinch.We congratulated each other, thanked the home owners for their gracious hospitality and headed out to continue birding, not wanting to disturb the bird any further.

Another fact worth mentioning regarding this birds possible provenance is the existence of extreme wintry conditions in Western Europe and the Uk in early winter. This is an ecept from the Portland Bill Bird Observatory in extreme southern England on November 9th.


Ten thousand Chaffinches!!! You think one of those could have made it here. then wandered around enjoying the unusually balmy conditions in eastern Newfoundland before being driven to a feeder recently after a series of storms? Seem plausible to me. The movement of Chaffinches continued over the course of the rest of November and into December. We also got about a dozen or so Northern Lapwings this winter, another cold weather migrant noted at Portland Bill over the same time period. So, if there was ever going to be a 'countable' Chaffinch in North America, then I think this bird is it.
Posted by Dave Brown at 6:02 PM