To start with,no the s at the end of Redwing in the title is not a mistake. Today there were TWO Redwings found together feeding in a kelp bed at Portugal Cove South (extreme SE Avalon Peninsula).We were expecting that there should have a been a Redwing out there lurking somewhere, but with no berries and consequently no Robin flocks, a Redwing is tough to find.

The birds were found by Richard Thomas,who should know them well having grown up in the UK. He was on his away to a local store when two thrushes flew across the road. Assuming they were just Robins(a number had been feeding in the immediate area recently)he never thought much of it. On the way back from the store he stopped to look at the 'Robins' and was nicely surprised to find not one, but TWO Redwings!!Below are a couple of record shots he captured with his point and shoot camera. 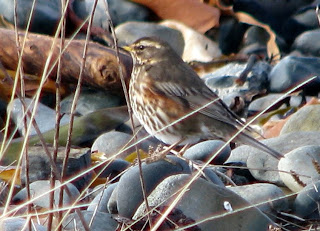 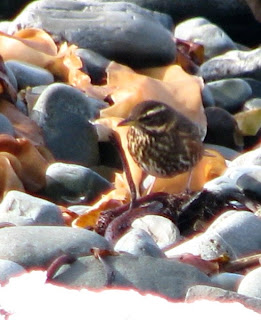 Notice the extremely dense streaking on the breast of this bird compared to the relatively sparse streaking of the bird above- photo again by Richard Thomas.

So hot on the heels of the Chaffinch we get two Redwings, what are we missing!! This is really just an addition to a growing list of amazing birds currently residing on the Avalon Peninsula.


NOTE: Redwing is now basically annual in Newfoundland. It is usually found between December- February, often feeding on Mountain Ash berries amongst American Robins. While we have had multiple Redwings present in Newfoundland at the same time,I think this is the first occurrence of two birds at the same location.
Posted by Dave Brown at 7:37 PM