Multiple Owl Species- In my yard in Newfoundland!

One of the great things about birding is that you never know what is going to happen from one day to the next. The sheer unpredictability of the endevour is a large part of the attraction for me and today was a perfect example.

By all accounts, today was a(birding)write off up to 4:30. Generally, I drop my fiancee,(Jen) off to work then head to the sewage outflow and Quidi Vidi lake for some gull watching. Well, for the first time in a while today the sun came out. Sun and gull watching, on a snow and ice coverd lake, don't mix well. Therefore, I decided to stay home edit some photos, try to publicize the blog a little and leave the birding to someone else for a change.

At around 4:00 I looked at the clock and thought, well maybe I'll leave early for Jen and drop by the sewage outflow to see what's happening for a half hour before I get her at 5:00. I got dressed, grabbed my camera and bins and headed out. Upon opening the door I could immediately hear a series of sharp chip notes. I looked and down at the back of the house there were a few Juncos giving alarm calls and flitting about in a large Spruce tree. Now here is where a little background information is beneficial. I choose the current location of my home based on it's birding potential. The first year we moved in we had Newfoundland's one and only Bullock's Oriole at our feeder,so I felt good about the decision. Also, since we moved I have had a habit of checking the large trees that border out property for roosting Owls in the winter.

On occasion small Owls will move into St.John's in winter, presumably because their rodent prey is getting harder to find after heavy snow falls. The city can be a good place to find a meal of mouse if your a hungry Owl.Anyway, given my habit of checking the property for Owls and the knowledge that Owls could be on the way, the Juncos behavior seemed a bit unusual. Sure enough when I got a little closer to investigate the birds behavior, I was pleasantly surprised to find a Boreal Owl tucked on a cracked off branch,right against the trunk, about 12 feet off the ground- WOW! We just don't see many Owls in Newfoundland. We hear them in spring, but seeing them, especially a small Owl, is a really special experience.

I quickly grabbed my camera and fired off a couple dozen shots. My shutter speed was horrible because it was about 30 minutes before sunset and the Owl was in a deeply shaded area. Here is one of the best photos I could manage. 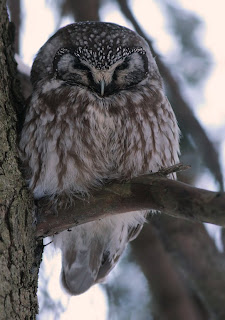 I knew this is a bird that other birders would want to see. The problem is I had forgotten my phone at my folks house a few nights previous. I decided to speed off and get Jen and call birders on the way back to the house. I arrived at Jen's work after a 7 minute drive that felt like an hour, popped my head in the door, shouted Boreal Owl in our yard!! That was enough to get to to leave 15 minutes early. I started calling birders.

I arrived home and after a short time a few birders came by to see the Owl now sitting with it's head tucked firmly under its wing and enjoying a nice snooze,despite the growing crowd beneath him. After about 30 minutes there were just four of us left,including fellow birders Gene Herzberg and his wife Karen. As we were talking about our good fortune in seeing this amazing bird, Gene almost got struck by what seemed to be bird droppings. This was odd because the Boreal Owl was not in the tree directly above us. Could there be another Owl??!! Then almost immediately Karen leaned a little and said, "there's another Owl up there". What..impossible!! One Owl is amazing,2 would be unbelievable. I moved over and peered up into the tree beside the Boreal to see a Northern Saw-whet Owl staring back at me. WOW!!!!!. I could hardly believe my eyes. Even now it doesn't seem quite real. Its like one of those dreams you have where you stumble upon this massive fall outs of rarities, or you find an Eskimo Curlew at your local patch, I was waiting to wake up disappointed, but it never happened, this is real. Two species of small owls in my yard, simply amazing!! 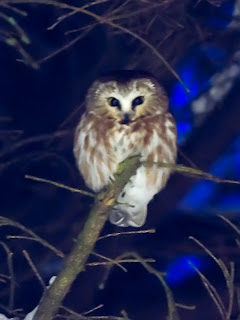 I immediately called back all the birders that had left telling them to return for Owling part II. I went inside to get my camera, but when I came back out I was told the Owls had flown and that was that.

Perhaps some places this would not have been that big a deal, but in the practically Owl-less city of St.John's and for Owl starved birders this was big, very big. This evening in my yard will no doubt go down in Newfoundland bird lore as one of those talked about moments that birders reminisce about. It brings smiles to the faces of those that were there and those who missed the event make a quick run for the bath room, or try to change the subject in an effort to quell the pain. Most birders can relate, we've been on both sides of the fence, I'm just happy that this time I was one the right side.
Posted by Dave Brown at 1:01 AM