The Identification of Newfoundland Empids

The purpose of writing this article is to highlight the differences and the similarities in the three species of Newfoundland Empidonax Flycatchers, namely, Yellow-bellied, Alder and Least Flycatcher. I think this article is timely because I've seen many posts by Newfoundland birders and bird photographers over the last month, asking for help with the ID of an Empid they had photographed. This is not especially surprising, since this group of small look-alike Flycatchers, are among the most problematic groups of birds to identify.Through the course of this article,I'll provide a brief introduction to the genus Empidonax adn I will attempt to give you the skills necessary to separate the three Newfoundland breeding Empids. I'll also highlight the critical features to note, when attempting to identify any Empid, anywhere. This is not meant to be an exhaustive, or definitive study on Empid ID, it is intended for the novice- intermediate birder, or even for the experienced birder who has largely avoided Empid identification.

Before I get into the ID stuff, lets back this up a bit and clear up some of the jargon I've been using. So what the heck is an Empid anyway? Simply put an Empid is a member of the genus Empidonax. A group of small Flycatchers, most often, shades of muted yellows, buff, white and green. The name Empidonax is derived from the ancient Greek emphis, 'gnat' and anax, 'master', which seems to make sense, since they feed almost exclusively on flying insects. There are currently 15 species of Empids, of which only 3 breed and have been recorded in Newfoundland. There is one recent fall record of a Willow Flycatcher, that if accepted, would represent the first record for Newfoundland. Since it is ridiculously, identical to Alder Flycatcher, analysis of it's call notes using sonograms were used to identify it as a Willow Flycatcher and not Alder. Both Willow and Alder Flycatchers were once combined as a single species called "Traill's Flycatcher ". However, it was thought that birding was becoming too easy ,so the AOU found it necessary to create new species, that were nearly impossible to identify, to give expert birders more of a challenge.I'm joking of course, if they really felt this way they would split American and European Herring Gulls :)

So anyway, we have three species of Empids in Newfoundland. The most widespread by far is Yellow-bellied Flycatcher. If you see an Empidonax Flycatcher in Newfoundland, it's most likely this species- unless it isn't. The next most common is Alder Flycatcher. Alder Flycatcher is found throughout the province. It is rather uncommon on the Avalon Peninsula, but fairly well represented in the rest of the province in scrubby second growth forests. The third and rarest Empid in Newfoundland is the Least Flycatcher. Least Flycatcher is a rarity just about anywhere in the province at any time, except in the Codroy Valley, where it is generally expected and known to breed in small numbers.It's worth noting that in fall all bets are off, any of these three species could turn up at just about any coastal location during migration.

Now getting to the identification. Generally speaking, these species are dissimilar enough, that if you know what to look for and you get a sufficient look you can tell them from one another (in most cases). When identifying any Empid there are key features to look and I'll summarize them below. 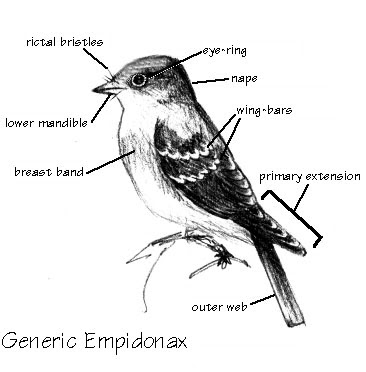 Generally speaking Alder is the largest and most robust. It tends to have a big headed look and it has both the longest and widest bill. If you see enough it gives the impression of being broader across the shoulders- a fuller bodied look. Yellow-bellied is the next largest and is generally intermediate between Alder and Least. Least Flycatcher is the smallest of the three and has the slightest, pointiest bill. The differences between all three species are just a matter of millimetres, so it's not like we are talking about huge disparities. All of these traits are relative and become more useful with some experience. Note the Least Flycatchers below aren't exactly in a straight line, so account for that in your judgements.

For birders in the field, I am mainly referring to the length of the exposed primaries, beyond the tertials on the folded wing. If you don't know what tertials are or can't picture what I'm referring to, then that's an excellent reason to book an online tutoring session with me or attend one of my workshops! :) As for tail length, we are concerned with how long the tail looks relative to the length of the wings. Since longer wings can intersect, covering part of the tail, this can make the tail look shorter than it actually is. This is why many beginning birders refer to gulls as having black tails. What they are actually seeing is the folded primaries that are covering the tail!

Least Flycatcher- Shortest primary extension and a relatively long tail compared to body length. Therefore this causes Least Flycatchers to look have more of a short-winged and long-tailed, sleeker look from behind than either Least or Yellow-bellied.

Alder Flycatcher- Alder has the longest tail- but it's also the largest of the three. It's primary extension, which longer than Least is shorter than Yellow-bellied. This creates a moderate look, with both moderately long wings on a longish tail.

Yellow-bellied Flycatcher - Yellow-bellied is intermediate in size between Alder and Least, but note that it has the shortest tail and the longest primary extension. This serves to create a much longer winged and shorter tailed impression than Alder or especially Least.

Here is a short essay David Sibley wrote about eye rings and their importance in bird ID. Eye Rings are an important tool in Empid ID. Most Empids have a fairly obvious eye ring and the shape, colour and prominence (or lack thereof) of said eye ring, is a critical detail in separating the various species, including the three we are concerned with.
Note the differences in the colour shape and prominence of the eye ring.

Least Flycatcher- Has a bold eye ring that is often peaked at the rear of the eye. In my experience it is always white.

Alder Flycatcher- Tends to have a weak eye ring. This seems to be somewhat variable as is the colour. It can range from buff to white, but more often white. It is thinner than in either Least or Yellow-bellied.

Yellow-bellied Flycatcher- Eye ring is similar to that seen in Least Flycatcher. Similar in boldness and also shape. However it differs in colour, it's usually a yellowish-buff colour and never really white, like in Least or Alder.

There are some other differences as well, such as bill width and shape, head shape etc. These features tend to be difficult to discern in the field and their discussion is beyond the scope of this article. Given all the traits discussed above, the absolute best way to distinguish these species or any other Empid is by their vocalizations.

Empids can be readily identified by their songs and while their calls are unique as well, they can be very similar and a number of species give 'quip' or 'whit' notes in the fall, further complicating matters. Below I will add links to both the songs and typical calls, for the three species in question. They are definitely worth learning!

Least Flycatcher song. Note the song consists of 'che bek' notes given in a rapid burst, usually of 3-5 or more. This is in contrast to Yellow-bellied, which gives a similar 'che bek' note in singles or with more time between calls. This is the typical call note of Least Flycatcher. The call is especially prominent toward the beginning of the recording.

Alder Flycatcher song 'free beer' and call. Call is more of a 'pip' rather than a 'whit'. Can be distinguished from the calls of Least Flycatcher with experience. It has other calls that is uses, but that is the common one.

Yellow-bellied Flycatcher song and call. Song is usually a single 'che bek' note. It can be repeated, but usually with longer intervals in between. The call is quite different being a whistled 'chu wee'

So to summarize. Here are some important points.

Least Flycatcher- the smallest of the three Empids discussed, a bold white eye ring that is often peaked at the rear. It has the shortest primary projection and the longest tail, relative to it's body length.

Alder Flycatcher- The largest of the three Empids we discussed. It has a moderate primary projection and moderate tail length, giving it a more balanced look than Least or Yellow-bellied. It has at best a weak and often thin eye ring, when compared to Least and Yellow-bellied, which is usually white, but can be buff. It is usually whitish below, with a grey wash on the chest.

Yellow-bellied Flycatcher- It tends to more yellow below than another of the three Empids listed here and the only one of the three than has any amount of bight yellow. The grey wash on the chest tends to be less noticeable. It has a bold, yellowish or buff coloured eye ring, not white as in Least and is always bolder than Alder. It tends to have give a long-winged, short tailed impression due to the combination of a long primary projection and a relatively short tail.


Below are some photos of the three Empids, can you identify them? 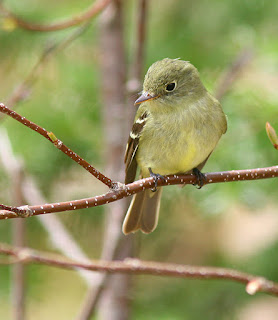 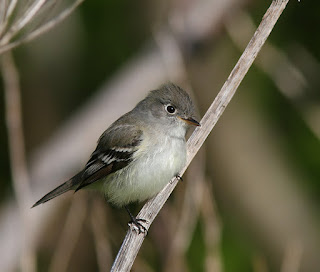 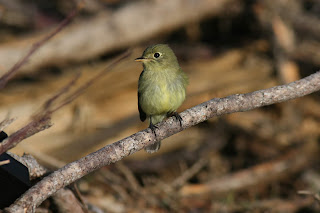 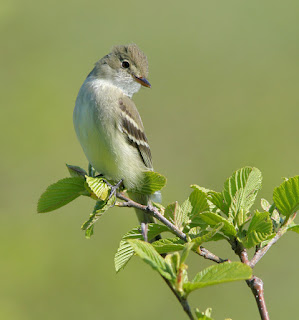 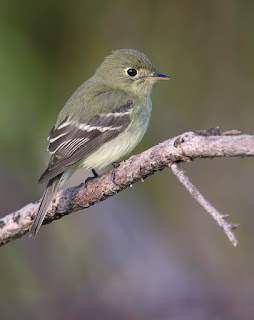 These articles are quite time consuming to write if you enjoy them and would like to keep them coming, please considering supporting the page by donating using the paypal button at the top. Please do not feel obligated, but the support helps to cover costs for the Birding Newfoundland website and other costs etc. Thanks and stay tuned for the next one!

I am thrilled to be able to provide educational and entertaining content. However, these articles are very time consuming to write. If possible please considering subscribing to the blog with a very small monthly fee via the subscribe button. This will help to cover costs of website maintenance and all the other expenses that go into producing the content. Whether you subscribe or not you will still have access to all the content, the small subscription fee is just a means of showing your support. Thank you!