Yesterday I was happened upon a photo of a bird labelled as a Palm Warbler. I was immediately interested in this, since the photo was taken near St.John's and Palm Warblers are quite rare in summer near St.John's. What made this even more intriguing was it was a mostly pale brown/whitish bird, meaning it would have been a 'Western' Palm Warbler.


So getting back to the original point, a Western Palm Warbler was photographed in St.John's, or was it? Below is the bird in question. It's odd for sure and I can understand the difficulty in identifying it.I thought it made an excellent example of the possible complexities of warbler identification, particularly as fall approaches. 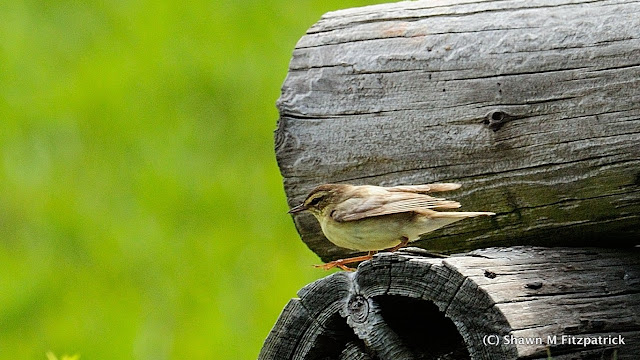 This is an unusual bird to be sure. It's very nondescript and the most notable feature is probably the pale supercilium. This bird would also have been bobbing it's tail, which Palm Warblers also do. However, this bird provide a great learning experience. In birding, always be prepared for the unexpected and always consider unusual versions of typical species before settling on a rarer, less likely species as the identification. Now this isn't always easy to do. You think you've found something exciting, the blood is pumping and things get a little hazy.

If it's not a Palm Warbler, what is it? Isn't it obvious, it's a Northern Waterthrush! It's actually not that obvious because this is a very unusual individual. Typically, Northern Waterthrush has brown streaking over it's entire under parts, including the throat and the under tail as well. This bird seems to lack streaking completely in some areas and at best have thin, blurry streaking on it's flanks. This is all kinds of wrong for Northern Waterthrush, It does however, have the correct upper parts colour, the facial pattern is correct, including the colour and shape of the supercilium. Also, the leg colour is right and the birds posture is typical of what you would expect of a walking, rather than hopping species. Below is a normal Northern Waterthrush for comparison.
When birding one always has to be aware of many things. The time of year, what's happening with bird migration at the time, your location and the likely or unlikely species for that location. Then when you see something that seems like it might be a rarity, it's always a good idea to consider an aberrant individual of a common species. I would strongly suggest that anyone who is birding in Newfoundland have a copy of the checklist of the birds of Newfoundland, or have access to it online to review. This checklist provides vital information to which species are seen in our province and indicates their likelihood in a given season. In this case, it would  not have been very helpful because, but it's a good idea to have one anyway!
Posted by Dave Brown at 6:41 PM