Gyrfalcon Dreams and Ecstasy in Ivory

Well it's been about ten days since I started my Gyr search and I'm still Gyrless!Today aside from looking for Gyrs I went to look for a single King Eider that has been associating with over 3000 Common Eider. When I got to the location the birds we way off shore. I got to looking around the area. I was perched atop a high cliff face. Opposite me were steep cliffs that would soon be covered in nesting Black-legged Kittiwakes, this was a great spot for a Gyrfalcon- we know they've been seen here before.

Anyway, the point of all this is I finally realized that if the Gyrs aren't going to come to me, then I'm going to go to them and so it was decided. I'm going to make the 1050 km drive to the northernmost tip of Nefoundland. This is not a place where you see a random Gyrfalcon, it is within their regular winter range. They are seen there this time of year perched on cliff faces waiting for an opportunity to take some unsuspecting gull or duck. I saw photos taken last year of a Gyr taking an Ivory Gull from this exact location. If I see that, it will be the closest thing to a religious experience I have ever had. To see that scene play out is the pinnacle of birding. I was supposed to be there, but I couldn't make it at the time and I've regretted it ever since. 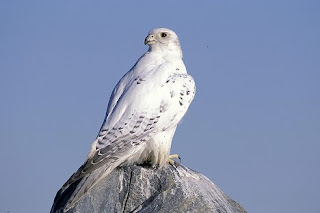 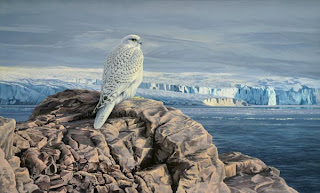 I can see it happening like this. A white morph Gyr perched on a rockface with snow covered cliffs in the background. I'm almost salivating , just thinking about it.I do not know the artist but I figure if I'm going to use the painting I should link to his site. It can be purchased here.

Ok, so it's obvious I love Gyrs, but you know that's only half the equation. There is only one bird that for me can rival Gyrfalcon in it's mystic appeal to birders- Ivory Gull. Bruce Mactavish said of Ivory Gull "its the only bird that looks better every time you see it". Ivory Gull will not be a guarentee on my trip and Gyrfalcon is probably more likely. However, I have reason to be optimistic about the possibilities of seeing these Arctic ghosts. 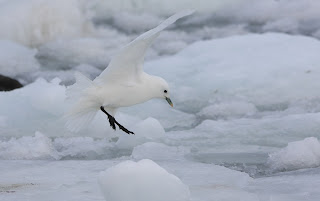 Above Photos property of Bruce Mactavish


Starting around March 18th a pretty strong weather system originating in northern Canada is going to move over northern Newfoundland and looking at the isobars it looks like there is going to be some fairly strong northerly winds associated with ths system. Ivory Gulls loungin on the pack ice in the Labrador sea could be encouraged to move south to northern Newfoundland. 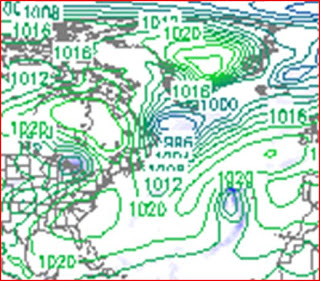 Note the tightly packed isobars over Newfondland bringing winds from the Labrador Sea and hopefully Ivory Gulls to Northern Newfoundland.

Things calm down for a couple days then another system moves in from the southern US and looks like it will itensify offshore, growing as it approaches NL. Looking at the maps, it looks like this system is big and might continue north. If it does it will generate more fierce winds with a northern component- Again good for IVGU and GYR! 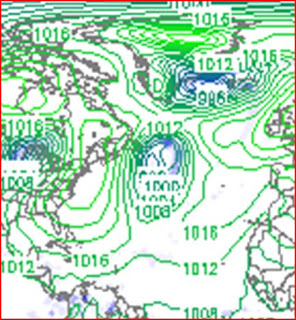 I'll end this posting with a series of excellent photos taken by Bruce Mactavish in late February 2010 at the tail end of an Ivory Gull invasion into Northern Newfoundland. Well over 100 Ivory Gulls were seen in that week. I'm not asking for that many, a few will do. Heck even a great experience with one! 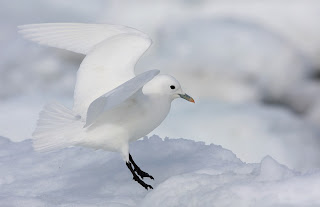 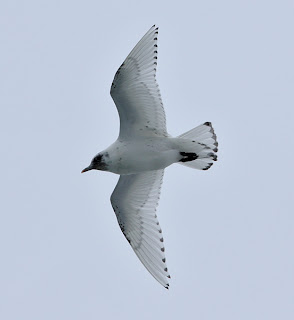 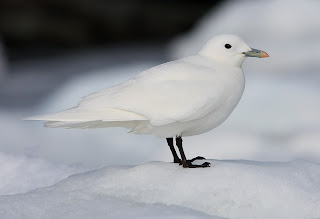 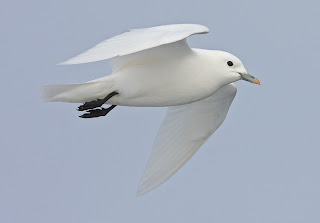 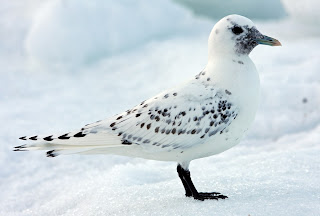 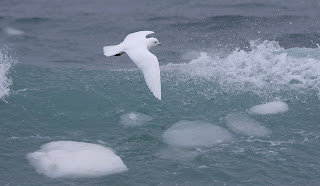 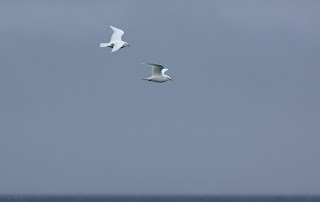 All IVGU photos courtesy of Bruce Mactavish
Posted by Dave Brown at 2:23 AM