Ok so I'm a bit late in updating here but I've been kept busy birding and working and chasing Fork-tailed Flycatchers! I'll have more to say about that later.

So the last low pressure system did bring birds with it. We weren't inundated with hordes of southern warblers and vireos but there was a noticeable arrival of warblers on the Cape Race road at the extreme south eastern tip of the Avalon Peninsula. ( see map in previous post).

There is not much vegetation in this area and nothing much to hold deciduous tree loving migrants. In fact I don't think there is a single deciduous tree or shrub on the entire 21 km road. There might be a single small Mountain Ash but it could have died. What is there is tuckamoor. I'm planning on dedicating a post soon to "birding the tuck" as we call it. This refers to birders attempting to coax passerines from scattered,dense, tangly patches of stunted conifers. It's not an easy endevour but can produce some amazing results, but again that's for another time.

So, three of us hit the Cape Race road on Oct 9 and 10th. Our efforts resulted in 8 species of warblers and two Vireo species. Highlights included, Orange-crowned Warbler (3), Prairie Warbler (5),Palm Warblers (6-8),Nashville Warbler,Pine Warbler,Yellow-breasted Chat (2) and Warbling Vireo. There were also 6+ Yellow-billed Cuckoos, a bag of Baltimore Orioles and 6-7 Dickcissels.

So overall not bad for the area. On a standard day you could bird all of the Cape Race road in October and not see any passerines other than Savannah Sparrow. There was definitely an arrival.

So that was then and this is now. News broke yesterday of a Fork-tailed Flycatcher in Renews. In fact, I broke the news after opening an email from a contact down there. As soon as I opened my email and saw an email titled "stange bird" i got excited. I opened the email and was instantly floored! I never even opened the thumbnail images, it was already obvious that the bird pictured was an adult FORK-TAILED FLYCATCHER!!

I bolted from the couch with Jen asking what, what's going on. I muttered something while getting my coat on. Fo... led ly..catcher. "what? she said. FORK-TAILED FLYCATCHER!!, where are my keys!? Then, Jen says "We have to call people". Right..and when was the bird seen. In my excitement I had forgotten everything else. All I was thinking was, I have to get to Renews, now! I looked at the message again and it was apparent that it was seen very recently. I was now bordering on frantic. Before I could go I had to do a couple of things, I had to take the dog out and make some calls. I figured I'd combine these while Jen got ready. I was outside walking up the road with the dog trying to break the news on this bird.One by one, I either left messages or gave people the news. I returned home to find Jen ready and we hit the road. I had Jen make some other calls as I was driving.

Things were going well, I was swerving in and out of traffic, passing cars under questionable circumstances until we saw something up ahead- a police car, but was it? It was the right color the right model, it had an odd antenna thingy on top and some kind of white and blue reflective tape or something across the bumper, not to mention an RNC sticker on it!! There were two people in the car and one had obviously large aviator sunglasses on. That pretty much sealed it, we were behind a police car- great!

We were thinking what a great story it would be if we got pulled over by the cops, then somehow convinced them to give us a high speed escort right to the birds location. Since this was not likely to happen, we settled in and resigned to a slower than intended drive. Well, as it turns out these cops must have had somewhere to be because they were driving well over the speed limit and I was staying right behind them.I figured, they can't give me a speeding ticket to someone who is behind then right? Well, we tailed the cops almost all the way to Renews at about 25 km\hr over the speed limit and got there in almost record time. Now all we had to do was find the bird!

We made a pass through the area where it had been seen and nothing. We spoke to the discoverer and we were informed that it was on the wires directly above where we were standing only 15 minutes before we got there! Ok, we knew it was still around, it was only a matter of time. Soon, more birders arrived and we provided them with the info and split up. I took off in the car to broaden the search. Only about 5 minutes later my phone was ringing. I answered it and heard " we've got it, right where it was last seen!". I wasted no time getting there and finally on the wires, there it was, a perfect, adult Fork-tailed Flycatcher. This is a species I had chased in Newfoundland before but had not been successful and now here it was, it felt good, a big relief. It was a Newfoundland life bird and #264 on my current year list, putting me 17 species ahead of the previous record. 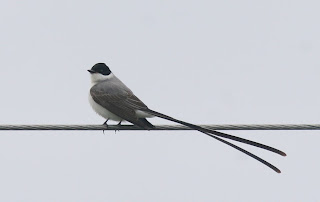 5th Fork-tailed Flycatcher for Newfoundland but the first that stuck around long enough to be viewed by numbers of birders. (as of Oct 18 the bird is still around)
Posted by Dave Brown at 2:43 PM