On Monday February 15,local birder Alvan Buckley and I birder the southern Avalon Peninsula. Our primary target was the Hoary Redpoll that has been frequenting a Portugal Cove South feeder.

we got underway early,weather was excellent,which was the opposite of what was forecast. We pretty much birded the entire day without anything exciting. the Redpoll was no where to be found and the meagre highlight was nice looks at a couple of Red-throated Loons.

It was only 1:00 in the afternoon and we were already heading back north towards St.John's. We decided to visit all the small coves along the way checking for Alcids close to shore and a stop in Ferryland to look for a long staying,yet elusive ( to birders at least) Dickcissel. Well, we dipped on the Dickcissel and hadn't found any Alcids until we got to Calvert.

Driving through Calvert we spotted a Common Murre floating close to the wharf. We decided to drive out onto the wharf and try for photos. Our plan was to wait for the Murre to dive then bolt out fo the car and get a few photos when it surfaced. The Murre dove and we got in position. We got some photos when it surfaced,but amazingly it swam away from us and close to shore. We bolted ot the shore where the Murre was diving. We hid behind a conveniently places warehouse and waited until the Murre dove and again we moved into position. The Murre popped up incredibly close,we got a few shots,then it dove again. Amazingly it popped up again and continued to feed only meters from us for almost 30 minutes. Not satisfied with the photos I was getting from the top of the breakwater, I decided to jump down on shore,since the tide was out and the waves were very small. This was great,until the tide began to rise very quickly. First a slightly bigger push of water,then a slightly bigger wave,then a much bigger wave! I was actually kneeling in the water and barely rose up above and got my back to wave to spare my camera equipment! But it was fun and worth it!! 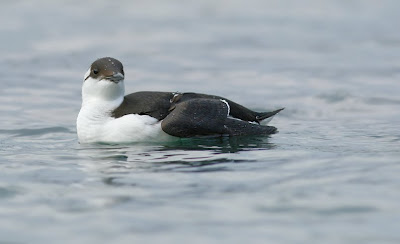 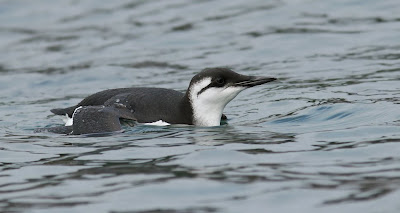 Compared to the rest of our day this was exciting. I was explaining to Alvan,how sometimes on these trips we don't see anything rare,but there are usually memorable moments and we would likely remember the Murre photo session as the highlight of the trip. We had just pulled into Witless Bay as i was saying this and I had just gotten on 3 shorebirds flying across the bay. The default shorebird in winter is Purple Sandpiper,but these birds looked slightly off,probably because I really wanted to find something exciting. I followed the birds to shore and was suggesting that we drive over to have a look,when it happened! I saw a white gull way off in the distance. It looked somewhat unfamiliar. It's flight seemed unusually buoyant and reminded me of a cross between and Iceland Gull and a Kittiwake. I looked at the bird for about 5 seconds then it sunk in- this is an IVORY GULL. That is when I probably scared the heck out of Alvan, when I yelled,IVORY GULL,this is a f***ing IVORY GULL- I was a little excited.Pulse racing, I jumped out of the car,grabbed my camera and fired a few distant shots,just for the record,but the bird was drifting away.We had to chase it.

A couple of minutes later after a hairy 80km/hr drive down a narrow side road we were again watching the Ivory Gull. We were oblivious to the fact that we had invaded the property of a B&B and there were a few curious people watching us through the large bay window. I'm sure they were wondering what these two nuts we doing running around their front lawn with spotting scopes and cameras,yelling and waving to each other. we stayed here with the bird for about 20 minutes. It was working the coast and actually flre right in front of us several times. Unfortunately it was getting dark at this point and the bird was a little distant for photos. I did manage to grab a few record quality shots as the bird flew by and landed briefly.

WOW!! How things can change. What started out a one of the most bland birding days of the winter,ended out being one of the best. I often tell others that it only takes one bird to change things around and that's so true- especially when that one bird is an immaculate adult Ivory Gull. 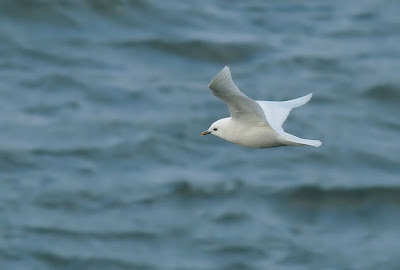 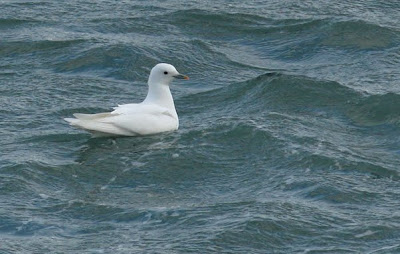 Word is that there are flocks of Ivory Gulls in southern Labrador. Also, visiting birder/photographer Brandon Holden found three!! in Savage Cove on the Northern Peninsula. Combine this with my bird and things are shaping up for a good ole invasion of Ivory Gulls. Stay tuned- this might only be the beginning!!!

EDIT: 10-20 Ivory Gulls seen near the straight of Belle Isle in northern Newfoundland!!!
Posted by Dave Brown at 10:17 PM