Well,not surprisingly Hurricane Maria was a bust for pelagic birds. The storm was not set up properly and the tremendous speed with which it spun through Newfoundland made for less then ideal circumstances for sending hurricane waifs to our shores. Although the center of the hurricane passed over the Avalon Peninsula the storm was partially torn apart by strong wind shear from days previous. It became warped further as it entered the cold waters surrounding Newfoundland. This meant that most of the storms force lay in the NE quadrant, which passed east of Newfoundland. Maria produced peak gusts at Cape Race of 108 km/hr. For those of you who know of and have birded Cape Race,this equates to just another windy day at the Cape.

In analyzing this storm during its approach I quickly became more exited by the low pressure system that was moving up the eastern seaboard (responsible for directing Maria towards NL, away from the Eastern Seaboard). In years past fast moving lows (that coincide with offshore tropical systems) that sweep up the eastern seaboard, or move in from the Great Lakes have produced large arrivals of passerines.It was my hope that the same thing might occur when I started looking at the weather maps for Thursday September 15th and Friday September 16th.

In the following paragraphs I'll compare Maria and her associated low with Tropical Storm Chantelle of September 2007 and a low pressure system that swallowed it up and passed over Newfoundland. There are some interesting similarities and differences in the two storms, but as we'll see both looked very similar on weather maps and both produced a fallout of passerines on the eastern Avalon Peninsula, namely on Bear Cove Pt Rd.

Bear Cove Pt Rd is located within the town of Renews about half way down the eastern shore of the Avalon Peninsula. There are two factors which I believe make this road an excellent migrant trap.

1) position- the end of the road is located at a headland which juts out from the coast,perhaps improving this location as landfall point. As well, there is a lighthouse at the point, which might serve as a beacon for wayward birds traveling in the dark. Light beams from lighthouses have long been thought to attract birds.

2) habitat- much of the coastline of the Avalon Peninsula is dominated by barrens and stunted conifers. This is not exactly th preferred habitat for Neotropical migrants. However,when these areas are disturbed by the building of roads there is often a flush of second growth that sprouts up along the roads. In many cases, in Newfoundland Alder bushes grow en mass along these coastal roads. Compared to the surrounding barrens and conifers these alders beds look like oasis' to weary migrating passerines. 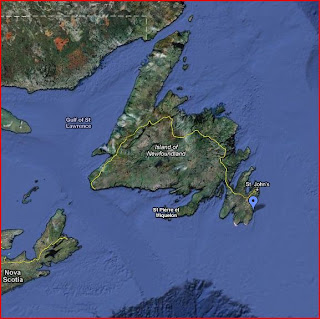 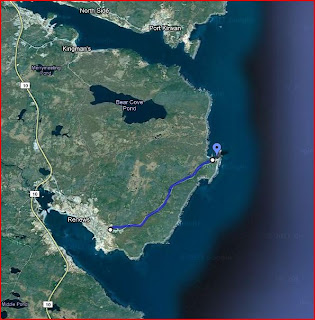 So now that the location for the events has been explained, lets take a look at the weather that helped make it happen. On September 11 2007 there was a deep trough in the jet stream created by a deepening low pressure system over western Ontario. There are also two other low pressure systems located north of Hudson's Bay and Labrador.As you can see by looking at the weather map below there were winds blowing from the Great Lakes directly to Newfoundland. The following day the more northerly low pressure systems moved farther south creating a strong south westerly flow.On the third day Thursday,September 13th, this flow of air that had been SW of the Great Lakes on Tuesday,into Cape Cod and the Maritimes on Wednesday, was now flowing into Newfoundland. When looking at the weather maps pay special attention to the area where the isobars are tightly packed and notice how that tightly packed area moves west to east over the three days.

Fastforwarding 5 years we had a similar system (September 15-17) that brought a big influx of birds to the eastern Avalon Peninsula. Once again there was a deep trough in the jet stream caused by a low pressure system over Ontario and there was again corresponding low positioned to the north over Labrador and Northern Quebec. Looking at the weather map notice how tigtly packed the isobars are over the western Great Lakes, exactly as they were on September 14th, 2007. Once again, just as in 2007 the more northerly low advances south, this time combining with the low over the Great lakes to form a large, formidable low pressure system that was driving air from the southern Great Lakes towards Newfoundland.Between September 15th and 16th the winds whipped through Cape Cod and the Canadian Maritimes, just as they did from September 11th-13th of 2007. The winds made it to Newfoundland by Saturday, September 17th as strong Westerly and South westerlies. On the two days following the passage of the large numbers and a good diversity of passerines were found along Bear Cove Pt Rd.

It took each system three days to make it from the Great Lakes to Newfoundland and on the forth day a fallout of passerines was evident. Below I've paired the days 1,2 and 3 of the 2007 and the recent 2011 systems so you can see the similarities.


Included below that is a chart that compares the warbler species found after the passge of each system.


There is more to birding then just learning how to identify birds. Gaining an understanding of how weather drive patterns of vagrancy give a birder a significant edge when deciding when and where to concentrate their efforts. Sure anyone can go out and stumble into a rarity but the informed birder know what to expect, where to expect it and knows how to identify it. Of course, it's far from a perfect science and there is still a lot of guess work involved but the more time we spend analyzing weather and then comparing it to bird movements in our area the better we get at predicting events such as those described above.
Posted by Dave Brown at 12:34 PM