Well, I haven't exactly been updating this blog daily as of late,but then again,there really hasn't been much to report- the winter doldrums are here. I've been spending nearly full days at Quidi Vidi Lake lately looking for something new to no avail. It has been nice to see the Slaty-backed and Yellow-legged Gull almost daily,but it's really time for a new gull, I'm again thinking of Glaucous-winged Gull, we see how that works out.

As I mentioned in previous posting,gull watching at the lake has been hampered lately by the constant presence of a group of Bald Eagles. One immature bird has become particularly tame and oftrn spends extended periods of time close to the lakes edges and is totally unconcerned by the growing crowds of on lookers,that have taken an interest in the eagles at the lake. 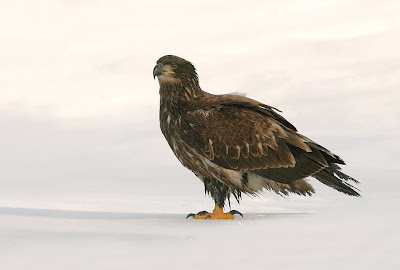 Aside from my daily visits to the lake I've been spending some time trying to get good images of our boreal birds. I haven't got much yet,but here is a Junco shot that I've come to like. 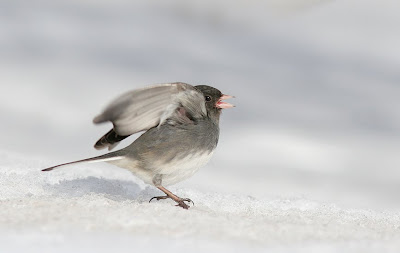 Well,unfortunately that's it for now. I hope to have something more interesting to report on my next update. In fact, I think I might write something about gull hybrids,since I've been seeing a few different combinations lately.

Regarding the tour this May, I'm still waiting to finalize the cost of accomodations and travel. I hope to have the cost finalized early next week. If you can't wait and need information sooner, email me and I'll see what I can do. Until next time...
Posted by Dave Brown at 8:24 PM