Ivory Gulls on the Way??

There are few birds that hold legendary,almost mythical status in the birding world. Some of these birds such as the Resplendant Quetzel and are amazingly colorful and beautiful. Some such as Harpy Eagle because they are astoundingly powerful. Then there are others because they combine,beauty and elusiveness. In Newfoundland we are fortunate enpough to see birds that combine all of the above. We are far enough north that we usually stand a reasonable chance of getting a few visitors from the high Arctic each winter. Birds that spend the majority of their lives in far flung,remote places,untouched by humans. Places such as North West Greenland and Baffin Island. One such Arctic visitor is the Ivory Gull,one of the most highly sought after of all bird species. Ivory Gulls often spend most fo their lives without ever seing a human. Ergo,they often have no fear of humans and are very approachable. Especially if you have some seal meat,moose,hamburger meat etc to offer! 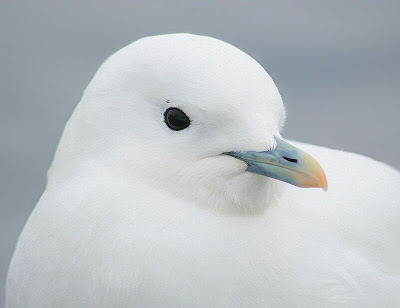 The Ivory Gull has it all.It has mystique and beauty, it is an Arctic ghost, and seeing one of these amazing birds, is something that most birders can only dream of. However,for Newfoundland birders,this is much more than a dream, it's very much a reality. Some years when conditions are right we see movements of Ivory Gulls to the shores around Newfoundland. They are often seen at coastal locations on north or east facing portions of the island. They often come in with the arrival of the pack ice, or fierce nor easters,where they are often seen scavenging on seal carcasses or dead birds frozen into the ice. Some years we often see them right in St.John's at Quidi Vidi Lake, or around the harbour.

I did some reading last night about the pack ice situation in Newfoundland and found that the pack ice had moved into the far NE portions of the island by late January. Perhaps,not coincidentally,two Ivory Gulls were reported from New World Island in north eastern Newfoundland. Also,perhaps unrelated, an Ivory Gull was reported from St.Shotts on the extreme southern edge of the Avalon Peninsula. This might be an indication that birds are moving though,especially when you add in a couple of birds from the eastern US. 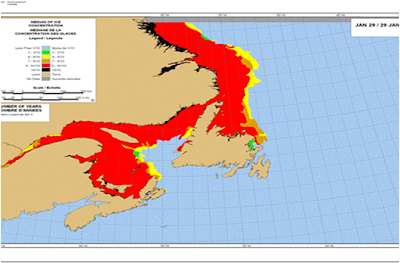 Sea ice coverage in NE Newfoundland as of January 29th.

So it's possible right now that we are experiencing a trifecta of events that might combine to bring us some Ivory Gulls;

1) birds moving south from Arctic-due to unfavorable feeding conditions etc?
2) arrival of sea ice in Eastern Newfoundland-we know there are IVGU's on the ice
3) massive storm that is currently east of the Avalon Peninsula,but is so large that the wrap around N, NNW adn NW winds will be blowing directly from Greenland and the Labrador sea for the next 3-4 days!

The strong winds might push the sea ice a little furth south and closer to shore,making Ivory Gulls accessible. Also,if some birds wanted to move,or are moving,the winds should bring them in our direction. Below are a few weather maps for the coming days,showing the current system. 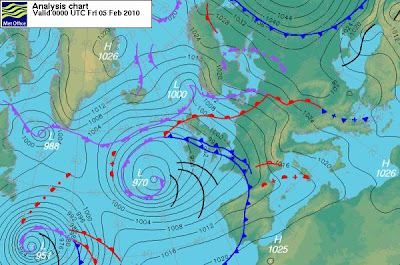 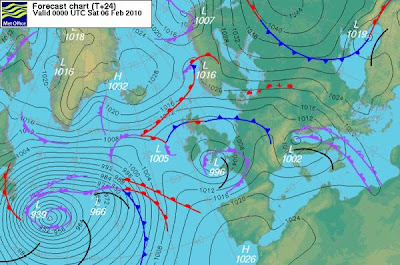 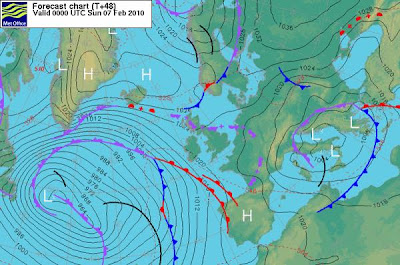 Right now as I type this we have already received about 20 cm(8 inches)of snow in the last 12 hours and are getting pounded by NNW winds gusting to 90 km/hr. This is supposed to continue for the next 2-3 days with possible accumulations of 50+ cm (20 inches) of snow likley. Once things calm down a little I'll be out looking for Ivory Gulls and anything else the winds might blow in. In 2000? in mid winter a juvenile Great Skua showed up a Quidi Vidi lake following a violent storm! I don't think we'll ever see that again,but a few Ivory Gulls and maybe even a Gyrfalcon that have moved our way,following the ice and riding the winds might be more than possible.

Disclaimer: what you have just read is nothing more than idle speculation. It isn't really based on any particular research,but just a combination of possibilities,that provide the fuel that fanatiacal birders need to keep them going through the lean times,during the depths of winter. Dream on!
Posted by Dave Brown at 11:20 AM