For some reason I can never seem to sleep at all the day before a big birding trip,like a big day a Xmas count, or even some regular birding days after storms etc,where I think there is potential for good birds. Last night was no different and the last time I looked at the clock before dozing off this morning it was 5:10.When the alarm sounded at 7:00 I barely made it up.

I met with a Dan Kaspar from Texas today to search for the NL specialties. At first, one might wonder why someone would travel from bird rich Texas to bird in NL in December. Why they get more species on a good Xmas count than we do in a big year! However,if you want to see some species such as Dovekie,Thick-billed Murre,Bohemian Waxwing etc you have to go the North East.When you add Yellow-legged Gull and Tufted Duck to that list you really only have one option, St.John's in winter. As mentioned in a previous blog,St.John's is the only reliable place in North America where one can hope to glimpse this European Gull.

I was extremely hopeful just a couple of days when Quidi Vidi Lake had frozen,however, after a day of rain and temps on the plus side of 0, the lake was 95% ice free. I met Dan at the lake at 8:00. I pointed out the various ducks,including several Tufted Ducks, another St.John's specialty. I would later count over 20 of these in a single flock at a local pond. The TUDU was nice,but gulls were scarce,just a few Iceland Gulls on the shore and a meagre gathering in the water in the center of the lake. We decided to head off in search of Dovekies and return to the lake in the afternoon.

We got to Cape Spear and found a small flock of Common Eiders(no Kings today).We had amazing looks at a flock of about 25 Purple Sandpipers as they dodged waves and fed on the jagged rocks, just feet from the Atlantic ocean. These birds seemingly choose, to winter in the most inhospitable habitat imaginable. After an hour still no Dovekie- I was getting a little worried. Finally I saw something that looked like a black and white nerf football bobbing in the water. I attempted to get Dan on this bird several times but the bird was diving frequently to avoid becoming breakfast for a Great Black-backed Gull. Eventually Dan got on the bird. It was somewhat distant but the Swarovski ATS 80 HD, cranked up to 60X, is pure magic and afforded my guest a great view of this most sought after Alcid.

After this, we moved on the harbour to see Black-headed Gulls,Iceland Gulls and got fantastic looks at Great Cormorants. All these were also target birds. After a quick break we headed back to Quidi Vidi Lake. As we approached the lake things looked much more promising.There were many more gulls at the lake,with a large flock in the center of the lake and another 500 gulls crammed on a small patch of ice in the far SE corner of the lake. To my surprise, there was also a large flock on the fields in Pleasentville(odd to find them there this time of year). We scanned this flock several times from different angles,but we couldn't find a Yellow-legged Gull. We decided to check out the flock that was resting on a small patch of ice leftover from the big freeze earlier in the week. I scanned the flock 3 times and saw nothing other than a few adult Lesser Black-backed Gulls and a nice looking adult GBBGXGLGU(this birds mantle was surprisingly close to YLGU). We were discussing alternate gull watching locations when I finally saw the 'rare shade of gray' sandwiched between a GBBG and a GLGU. I zoomed in and soon Dan was looking at his most wanted target bird... Yellow-legged Gull.

Below are two of four, Yellow-legged Gulls that have been found in St.John's this fall/winter. These photos were taken in October. There is a good chance that the bird we saw today, was the streaky headed individual seen here- now almost completely white headed, except for some light spotting on the forehead and lores. 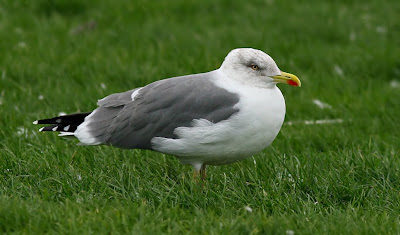 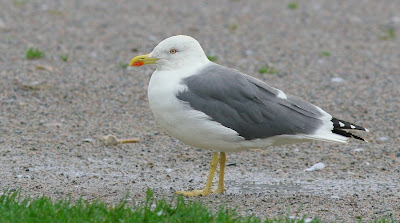 After enjoying some satisfying looks at the YLGU we set off in search of Bohemian Waxwings and Crossbills.in the last hour of light we checked several good locations but failed to see anything notable, other than very recent evidence of a Black-backed Woodpecker,that failed to shoe itself while we were there.

All in all, it was a very successful day. Now I'm off to try to get some sleep before I lead the first installment of the Winter on the Avalon Tour tomorrow. I don't think I'll have any trouble sleeping tonight though.
Posted by Dave Brown at 6:36 PM