Birding in Hurricane Chris and a Comparison to Other Storms

As of now there is a very good chance that hurricane Chris will cross the south east coast of Newfoundland's Avalon Peninsula, some time on Thursday. It is expected that the storm will have dissipated into a tropical storm or even a post-tropical depression by the time is makes landfall.

As I said in a previous blog, this is an unusual storm, in that it formed just off the Carolinas, remained stationary for several days and then began to track NE and pick up strength. That's in contrast to most storms, which have their origins off the African coast or in the Gulf of Mexico. But what does this mean for birding? To answer that lets first take a look at some previous storms including the "perfect birding storm", Hurricane Helene of 1958 and Hurricane Wilma of 2005.

This is not a topic I take lightly. Hurricanes cause enormous damage and disrupt bird populations. However, for birders they can be very exciting because they have the potential to displace birds over vast distances. These storms have been happening since time immemorial and will continue to occur. They will continue to displace birds. My thoughts are if the birds are coming anyway, we might as well enjoy them.

It has been a long time since Newfoundland has seen a hurricane borne fallout of birds. Well, that's not entirely true. In late October of 2005 the remnants of Hurricane Wilma combined with the passage of a strong low pressure system, and sent unseasonable numbers of Chimney Swifts, Swallows, Terns and Yellow-billed Cuckoos all over Atlantic Canada. It was perhaps the single largest displacement of hurricane driven birds ever!! Unfortunately, we blew it big time!!! Newfoundland birders failed to organize and there was no concerted effort to look for storm driven strays beyond the Avalon Peninsula. There were a bunch of good birds found on the eastern edge of the Avalon including hundreds of Chimney Swifts (rare in Newfoundland), Gull-billed Tern, Sandwich Tern and a likely Royal tern that slipped through my fingers tips before I clinch the id! 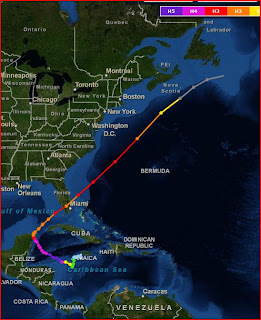 A number of factors combined to make this an extraordinary event. First of all the storm formed very quickly and intensified to one of the strongest hurricanes on record. I believe it had the lowest central pressure of any hurricane ever! It formed during a time (mid October) and in an area (Gulf of Mexico)where huge numbers of birds were migrating at the time. Even though the storm fizzled out and never officially made land fall in Newfoundland it combined with an intense low pressure system that allowed it to entrain birds until they finally escaped near the coast of Atlantic Canada.

To give you an idea of the significance of the movement of Chimney Swifts. Prior to Wilma I had seen 8 Chimney Swifts in Newfoundland in 10 years. On a singe day after Wilma, I saw over 150! Anyway, enough talk of that. I've been trying to suppress the memories of how bad we ( birders) botched this storm.

So moving on. Aside from Wilma you have to go back 53 years to September of 1958, when Hurricane Helene rained storm driven strays all over Western Newfoundland.The most notable species involved in this event were Laughing Gulls ( many hundreds) and Black Skimmers ( 10's). I don't think we have any records of Black Skimmer since.


This exactly the type of hurricane we need to bring in exotic terns and seabirds. Most important is the storms track over Tern rich Cape Hatteras, it's strength and the speed at which the storm was moving. Couple this with the fact that the storm managed to miss the rest of the eastern seaboard and hit Burgeo, Newfoundland directly as a H1 hurricane. It was the perfect storm for a wreck of exotic sea birds!! The thing is there weren't many people that were interested in looking for vagrant birds back in the 1950's in Newfoundland. Given what was found, one can only imagine what was missed! Given that even a single Laughing Gulls is notable in Newfoundland, flocks such as the one pictured below are truly incredible! 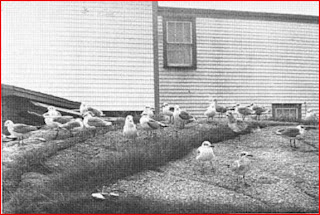 A photo the day after the passage on Hurricane Helene. Taken from Burgeo Sept 29th 1958. This photo was borrowed from a great paper written by legendary Newfoundland Ornithologist, Les Tuck. it can be viewed here in its entirety. (http://elibrary.unm.edu/sora/JFO/v039n03/p0200-p0208.pdf)


Since 1958 we have had a few other storms that have gotten us excited, but none have produced a significant fall out of hurricane birds. When we do get direct or near direct hits from Hurricanes they are often storms that have been well out to sea for the duration of their existence, never getting close enough to the Tern rich areas from Florida to Cape Cod. These storms often form near the Cape Verde Islands in Africa, then track west, north of the Lesser Antilles. They then start to intensify into hurricanes as they enter the warmer water, but often encounter strong steering currents from low pressure systems sweeping out from the eastern US. This results in the storms re-curving away from the US coast and towards Bermuda, sometimes tracking on to hit Newfoundland, but more often missing us entirely.

Its still worth birding these storms however,since they have brought us a few good birds. We have had a couple of Least Terns and a White-tailed Tropicbird that have been found after the passage of such storms. Other highly pelagic species such as Sooty and Bridled Tern may also be possible after such storms. Below are some examples of such storms from the last few years. 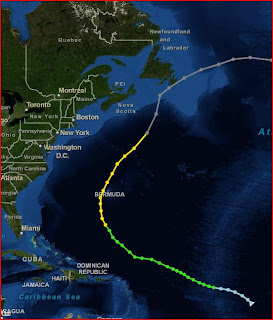 Hurricane Florence of 2006,classic Cape Verde storm that re curved around Bermuda and was extra-tropical when it passed off the Avalon Peninsula on September 12th. A Least Tern and a dead White-tailed Tropicbird were found after this storm. 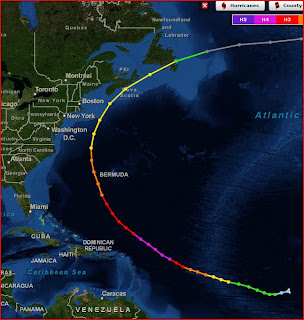 This much anticipated late August storm (Hurricane Bill) failed to produce anything too exotic, but we did find a rare Least Tern at Grand Bank, Burin Peninsula and there was a noticeable influx of shorebirds into the area. 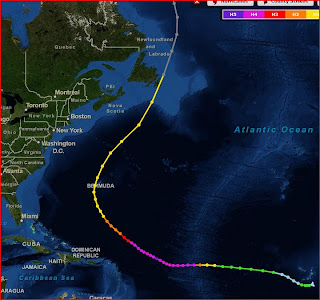 This utterly useless storm (Hurricane Igor) powered into the Avalon Peninsula on the morning of September 21st. It's winds(that peaked at 173 km/hr) left a path of destruction in its wake and failed to bring a single vagrant sea bird. This is exactly the kind of storm we don't want. If we're going to get battered we should at least get a few avian rewards as compensation!

So now that we've reviewed some previous storms, what can we expect from Hurricane Chris. If the past is any indication, the answer is probably not that much. However, this storm does differ from those discussed above in a couple of ways, though it's hard to say what impact these differences may have on potential birding.
Unlike most Atlantic hurricanes this storm had its genesis off the coast of south Carolina, not that far from Cape Hatteras and also not that far from the continental shelf edge. This is notable because the area is quite bird rich with a number of species of breeding Terns and the waters not far offshore near the continental shelf edge are known for hosting a large number of seabird in both density and diversity. The question is was this storm strong enough and organized enough to trap any birds and carry them north?

The current track is somewhat tantalizing because as of now the storm is predicted to cross Newfoundland on the eastern edge of the Avalon Peninsula an area well known to birders. There are several sheltered harbours and tern colonies that could possibly attract and host a weary southern Tern trying to escape the fierce winds. As of now it's not certain what time the storm will make it to Newfoundland, but when it does, what's the best way to bird this storm?

The best way to bird this storm depends on it's final track and the time of the day it impacts eastern Newfoundland. Assuming the track holds, there will be strong S or SE winds in advance of the storm as it moves closer to Newfoundland. That means we might see pelagic birds, such as Shearwaters and Jaegers pushed into south facing headlands and sheltered harbours. Somewhere like Biscay Bay could be interesting as the storm approaches. Things will also depend on the conditions at the time. It's quite possible there will be driving and rain and thick fog, which could make birding outside a vehicle impossible, so areas that allow you to view from inside your car might be especially appealing.

If the storm doesn't pass until into the evening, then there are other options available. As the storm passes, it will likely generate N or NW 'wrap around' winds in it's wake. This may cause a build up of birds in  North facing areas on the Avalon, such as Holyrood harbour, which is a well known spot for it's concentrations of pelagic species during storms.

My personal plan is to be somewhere on the SE coast when the storm makes landfall, if it does so early in the day. If the storm doesn't pass until the evening or into the night, then I will be waking up early the following morning and will be checking harbours all along the eastern coast of the Avalon down to Cape Race and west to Biscay Bay and Trepassey for any potential vagrant species.

Whatever you decide to do, be safe. We could see heavy rain fall during the storm and driving conditions could get pretty bad. No rarity is worth your life! Have fun and safe birding, I'll follow up on my birding during Hurricane Chris this weekend.