One of the benefits of doing a big year, is it gets you to places you would otherwise not go. A few days ago I made the 160 km trip to Clarenville ( stopping in Arnold's Cove on the way) to add Harlequin Duck and Gadwall to my yer list. Both are birds that I will likely see again later in the year, but in a big year a bird in the hand etc etc....

Anyway, while I was looking for the Harlequin Duck in Clarenville I came across this hybrid Tufted X Ring-necked Duck. 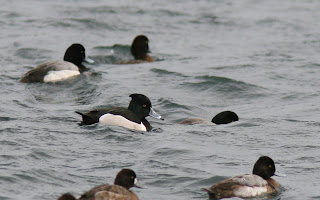 Notice the intermediate features, such as the stubby tuft, the RNDU style white around the base of the bill and at the tip and the gray washed flanks, which are gleaming white in adult male TUDU. 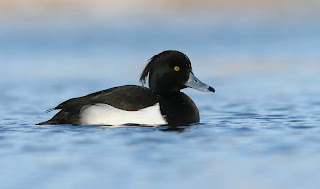 Compare to this adult Tufted Duck

Also worth noting is the wing pattern,which is intermediate between the two species. 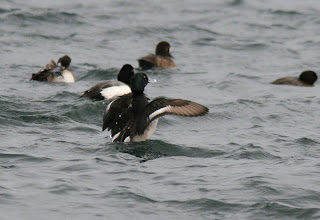 Normally TUDU's show bright white secondaries, with the white extending well into the outer primaries. While RNDU shows greyish primaries and secondaries. When you combine the two it seems you get a pattern similar to that seen in Lesser Scaup,with bright white restricted mainly to the secondaries. Although note in this hybrid the first few primaries show some white as well.

This individual was found a couple of months ago by Bruce Mactavish and I had completely forgotten about it existence,so it was a nice surprise when I saw it. This is a rare hybrid on this side of the Atlantic and is more often seen in Europe. However, over the course of te last decade the number of wintering Tufted Ducks in Newfoundland has increased dramatically, with 35+ in St.John's alone, at one point this winter. There are probably;y that many again, spread out over the rest of the island. If these numbers continue to grow, I wouldn't be surprised to see more of these hybrids. Equally likely and a more appealing option would be the first discovery of Tufted Ducks breeding in Newfoundland. It would seem to make sense to stick around rather than fly all the way back to Iceland each spring. Black-headed Gulls started out kind of like this and they have now established a small breeding colony in western Newfoundland, so maybe Tufted Duck will be next!?
Posted by Dave Brown at 7:25 AM