Wow,look at me,blog updates on back to back days!! Well,not that I have anything new and exciting to talk about personally,since I haven't been birding for days. For the last two days I've been considering birding the Cape Spear Rd but have been unable to find the motivation when the alarm sounds at 6:00!

Having said that,the purposes of this entry are twofold. Firstly it will serve as an introduction to birding Cape Spear for those unfamiliar with the area and secondly and selfishly, it will hopefully remind me, of how fantastic the birding can be there at times, if you only drag yourself out of bed and get out and look!

While much is said by myself and others about the fantastic birding of the southern Avalon, there is some great birding right around St.John's, particularly at Cape Spear. Cape Spear is the the most easterly point of land in North America and scores of people visit each year just to stand there and feel like they are standing on the edge of the earth. It is this feature(the geography,not the scores of tourists) that is responsible for the good birding at this location.

If you look at a map of the Avalon Peninsula you will notice a piece of land jutting out near St. John's, this is the Cape Spear headland. Under the right conditions( N,NE, or SE winds) the Cape can offering some spectacular sea birding,if you can find shelter from the wind and often accompanying rain or snow. During summer and early fall, on any given day, you can see Gannets and a variety of Alcids,but it is during strong NE winds,particularly those following the passage of tropical storms or intense cold fronts, that the real show starts. At times, under these conditions it is possible to see thousands of Shearwaters,along with Northern Fulmars, Leach's Storm Petrels, Jaegers and Alcids. In winter I have seen over 10,000 Dovekies flying past the Cape!!

Aside from the sea birding possibilities, the barrens surrounding the Cape and the deciduous growth bordering the roadsides offer great birding and serve as an attractive landing point for weary migrants that have reached land after a long oversea flight. Practically, every North American breeding warbler from Hermit to Worm-eating, has been seen on the roadsides from Cape Spear to the community of Blackhead over the years. Finding rare birds at this area is sometimes as simple as locating a flock of Yellow-rumps, or even a couple of Black-capped Chickadees or Kinglets and just watching every bird in the flock until you see something unusual,therefore knowing the common birds is essential,cause you can't know what's rare if you don't the common stuff!

Birding this area is basically as easy as walking the roadside and pishing. We generally do a cursory walk around the Cape itself if you get there early enough before hitting the alders. It's best to tackle the area by parting on the roadside just as the deciduous growth starts are birding up the road a ways,then back, then moving your car up a beat and repeating. It is often a good idea to get off the roadside and actually get under the cover of the alders and pish,this often attracts more birds and makes then easier to see then just birding from the shoulder of the road. Those people who participate in my fall birding trips will see this method in practice!.

I decided to hit Cape Spear this morning and see if the strong SE winds triggered a seabird movement. I birded there from 7:45-9:00 when I was forced to leave by non stop heavy rain making birding impossible.During the time I was there I saw, 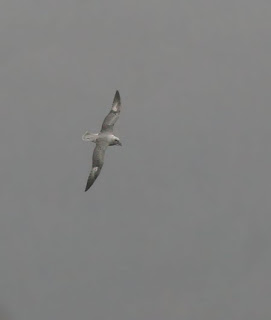 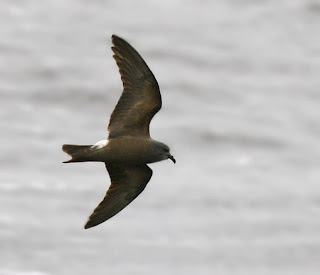